Floaters and blurred vision of the right eye

A 23-year-old male was referred to the University of Iowa Hospitals and Clinics Department of Ophthalmology and Visual Sciences for evaluation of possible ocular extension of T-cell lymphoma to the right eye. The patient had a history of T-cell lymphoblastic lymphoma with associated CNS disease, actively being treated with systemic chemotherapy. He reported that 3 days prior to presentation to an outside ophthalmologist he noted an acute onset of new floaters and blurred vision in the right eye. He denied photopsias but reported photophobia and eye pain. The referring ophthalmologist noted a white lesion nasal to the disc and started prednisolone drops every 1-hour to the right eye while awake due to concern for ocular extension of his lymphoma. The patient's vision continued to decline in the right eye prompting referral for further evaluation.

While on chemotherapy, the patient had a history of opportunistic infections such as Aerococcus and Acinetobacter,in addition to thrombocytopenia, which required platelet transfusions. Additionally, he had a Hickman catheter placed, which is a chronic indwelling central venous line. He denied fevers, chills, or night sweats. 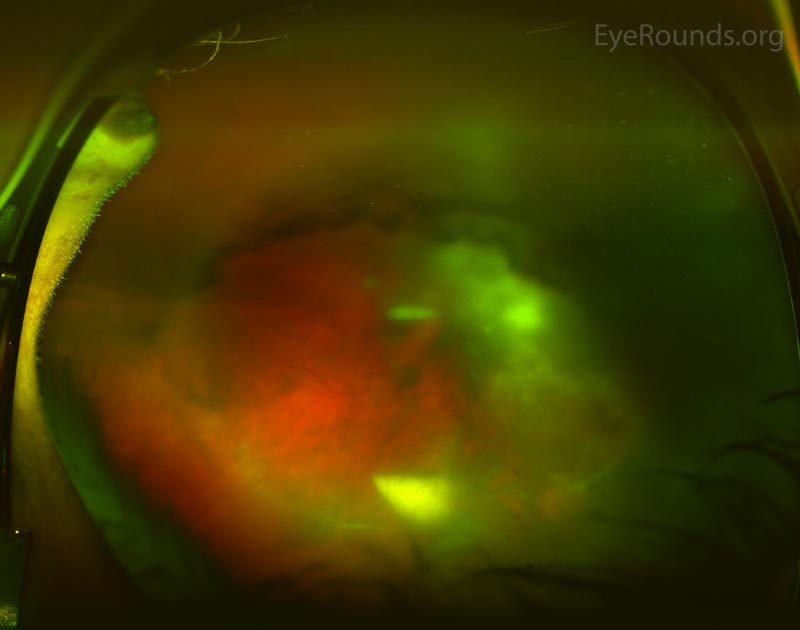 Figure 1. Optos photo of the right eye on presentation demonstrated the significant anterior vitreous cell, dense white vitreous opacities, and very poor view of most of the fundus.

Figure 2. Echography of the right eye demonstrated dense irregular vitreous opacities that were concentrated posteriorly along the fundus and surrounding the optic disc. There was irregular retinochoroidal layer thickening. The retina was attached.

Given the high concern for infectious endophthalmitis due to the patient's immune suppression and indwelling catheter, on the day of presentation, the patient was taken to the operating room for urgent pars plana vitrectomy with injection of intravitreal antibiotics (vancomycin and ceftazidime), antivirals (foscarnet), and antifungals (amphotericin B). A vitreous biopsy was obtained and sent for cytology, culture, and polymerase chain reaction (PCR).

The patient had daily follow up immediately post operatively. On post-operative day 2 the pathology from the vitreous biopsy returned with hyphae on the aerobic smear. Vitreous cultures were still pending and blood cultures showed no-growth. At this time, a repeat vitreous tap and inject of amphotericin B was performed. The patient was started on nightly intravenous amphotericin B managed in coordination with the hematology/oncology team. By the following day, vitreous biopsy cultures grew Aspergillus fumigatus and the intravenous medication was switched to voriconazole. Repeat intravitreal tap and injections of amphotericin B, then eventually voriconazole, were continued every other day for a total of 3 weeks. Throughout this time, echography was used for serial monitoring given the poor view to the posterior pole due to the vitreous debris. The Hickman catheter was presumed to be the source for the infection and was removed, as is standard of care for source control with presumed colonization of the catheter. The infection cleared and vitreous debris slowly improved. Unfortunately, the vision did not improve beyond counting fingers. After several months of follow-up the vision has remained stable and the inflammation and infection have not recurred. 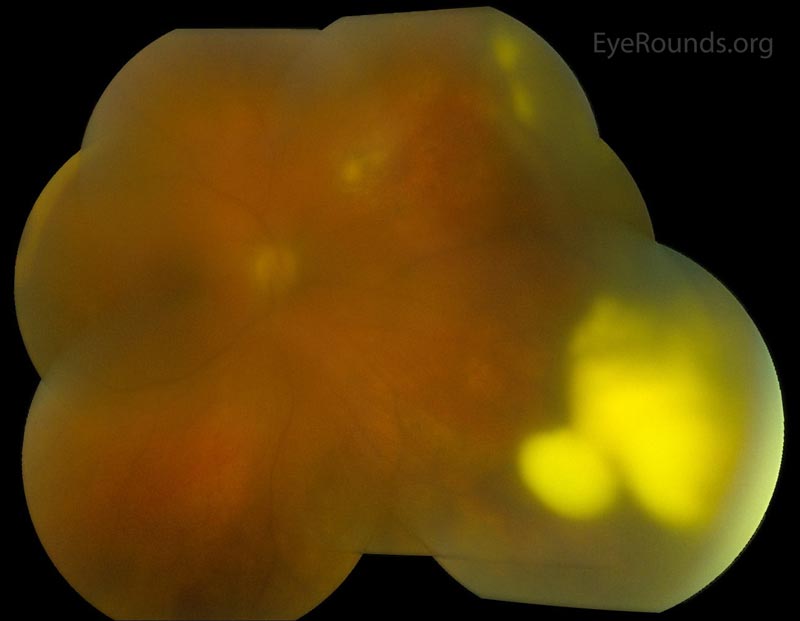 Figure 4. Spectral-domain OCT obtained the same day as the above photograph demonstrating development of an epiretinal membrane with distortion of the foveal contour. 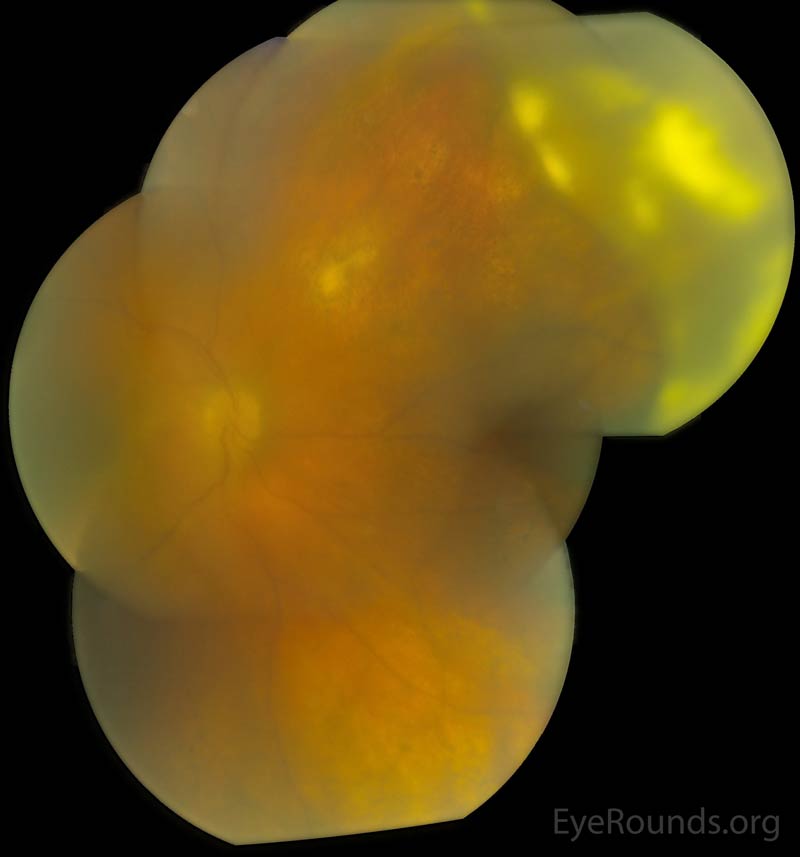 Endophthalmitis is the disease process where the vitreous and/or the aqueous humors are infected by bacteria or fungi. Endophthalmitis can be exogenous, due to an external penetrating source via trauma or surgery, or endogenous, due to hematogenous seeding of the microbe. Fungal endophthalmitis is overall much less common than bacterial endophthalmitis, however endogenous endophthalmitis is due to a fungus over half of the time with Candida being the most common and Aspergillus the second most common causative species.[1-3] Males and females are equally effected and the disease is initially unilateral in 75% of patients, although a quarter of that population progresses to develop bilateral disease.[4] Predisposing factors include those commonly associated with the development of fungemia such as central venous catheters, history of gastrointestinal (GI) trauma or surgery, use of broad-spectrum antibiotic therapy, hyperalimentation, neutropenia, IV drug abuse, corticosteroid therapy, and diabetes mellitus.[1,5] The presence of candida endophthalmitis in patients with multiple comorbidities is thought to be an indicator of high mortality risk.[1]

Endogenous endophthalmitis due to a mold is relatively rare; the two most common causative molds are Aspergillus and Fusarium.[5] Aspergillus is a saprophytic mold and is present in the soil across the globe. Humans are ubiquitously exposed to conidia (spores) via inhalation. Immunocompetent individuals rarely develop infection.[6] Aspergillus fumigatus is the most common subspecies of Aspergillus responsible for causing endophthalmitis as in this case. Other species known to cause infections include A. flavus, A. terreus, A. niger, and A. nidulans.[6] One large collection of 84 patients with Aspergillus endophthalmitis found that over 90% of the time there was at least one underlying condition leading to immunodeficiency, and often there were multiple conditions present.[4] In this same study there was no significant difference in infection rates between males and females and all ages were involved.

The most common risk factor for developing Aspergillus endophthalmitis is IV drug abuse; other factors strongly associated with developing this disease include recent hospitalizations, immunosuppression due to organ transplants, malignancy, and lung disease.[2,4,6] Aspergillus is also known cause keratitis and orbital cellulitis.

Aspergillus endophthalmitis is typically endogenous and acquired by hematogenous seeding in most cases. The most common sources of hematogenous seeding are the lungs or via IV drug abuse.[4] The conidia travel via the blood to the choroid where they seed and then migrate to infect multiple tissues in the eye.

The presenting symptoms of fungal endophthalmitis are often non-specific, with the most common complaint being decreased vision.[5] Other symptoms commonly reported include severe eye pain, ipsilateral headache, redness, eye swelling, photophobia, and floaters.[2 ,4] The presenting vision can be relatively preserved but is often decreased to counting fingers or light perception.[4 ,6] Anterior chamber reaction with cells in the aqueous plus/minus a hypopyon is often present.[4 ,6] On dilated fundus exam one sees vitritis; followed by yellowish, fluffy exudative chorioretinal infiltrates with ill-defined borders. These lesions are commonly located in the macula. The vitreous also often contains fluffy, irregular, yellowish exudative masses.[4 ,6 ,7] Intraretinal hemorrhages are frequently present, as is often the case in any form of endophthalmitis.[6] Aspergillus endophthalmitis is associated with infection of other organs, such as the lungs and heart. For this reason a thorough review of systems is crucial and often elicits other positive symptoms suggestive of systemic involvement.[4]

The appropriate workup is patient dependent and based on the clinical picture at the time of presentation. Cultures of the aqueous or vitreous fluid can prove useful in confirming the diagnosis as well as establishing antimicrobial sensitivities.[4 ,6] Histological analysis and evaluation by polymerase chain reaction (PCR) can also be helpful in identifying the causative organism faster than routine cultures.[7] Several papers document the benefit of performing a pars plana vitrectomy for diagnostic as well as therapeutic purposes.[2 ,6] Should medical or surgical correction prove futile, diagnosis can be made via histological analysis of enucleated eyes with stain and culture.[4] Blood and sputum cultures can also prove useful. Most commonly, a full systemic workup is required to screen for other areas of infection or causes of immunodeficiency, to be coordinated with colleagues in internal medicine.

B-scan echography is useful for monitoring patients, as in this case where the view to the posterior pole was limited by vitreous opacities. Color fundus photography is an additional modality that may be used to document the diagnosis and to monitor the patients' progress at subsequent visits, as was evident in this patient. Spectral-domain OCT (optical coherence tomography) imaging of fungal endophthalmitis demonstrates a diffusely thick choroid with subretinal exudation in the presence of a mostly normally organized neurosensory retina.[8] Many infectious or malignant causes of chorioretinal infiltrates with similar appearance to Aspergillus show disruption and loss of the normal retinal layers on OCT, further enhancing diagnostic yield.[8] It has been shown that Aspergillus produces a predominantly choroidal infiltrate, which is contrary to common viral or protozoal uveitidies where there is widespread involvement of the neurosensory retina.[8] Wide-field angiography can assist in ruling out viral or autoimmune diseases that present with diffuse vasculitis, as the vasculitis present in Aspergillus infection is localized to near the chorioretinal lesions.[8]

Given the rarity of this disease process, there are no well-executed randomized controlled trials comparing early vitrectomy versus intravitreal injection with or without systemic therapy. As such, the management of endophthalmitis secondary to Aspergillus is approached in a case-by-case basis with some combination of the aforementioned interventions. In the presence of vitritis, chorioretinitis involving the macula, or endophthalmitis it is advantageous to treat with intravitreal antifungal medications with or without early vitrectomy.[9] Many providers attempt treatment with intravitreal antifungals initially. Amphotericin B has traditionally been the intravitreal antifungal of choice with an initial dose of 5-10 mcg, with some clinicians giving as much as 20 mcg, however there are risks of adverse effects at higher concentrations, such as retinal toxicity.[2 ,6]  Intravenous and intravitreal voriconazole is well tolerated by patients with few adverse effects. The recommended dose for intravitreal voriconazole is 100 mcg and the number of injections depends on the patients response.[10] The use of topical or oral corticosteroids is controversial. Some providers feel that they are not indicated while others use them once the infection is being adequately treated. Steroids should never be used as first line therapy without adequate anti-microbial coverage as this can worsen the infection. These patients require frequent follow up as repeat injections are often warranted and performed within days to weeks, again depending on patient response.[6] One study documented the efficacy of intravitreal voriconazole in treating patients with culture proven, fluconazole and amphotericin resistant fungal endophthalmitis with complete resolution of the disease.[11] Several recent manuscripts have documented the benefits and efficacy of treating Aspergillus with intravitreal voriconazole with or without early vitrectomy with good outcomes.[12 ,13] A recent study in a guinea pig model of Aspergillus endophthalmitis showed greater efficacy with intravitreal voriconazole therapy over intravitreal amphotericin B.[14] If the anterior segment is involved the patient may benefit from intracameral voriconazole and anterior segment washout.[11]

Historically, many patients were initially treated first with intravenous amphotericin B.[4] However, the significant adverse effects of systemically administered amphotericin B, such as hypertension and nephrotoxicity, limited the management potential with this drug.[9] Prior to the advent of new-generation triazoles including posaconazole, voriconazole, and ravuconazole, intravenous and intravitreal amphotericin B was the preferred therapy.[10]Currently, systemic anti-fungal therapy often involves a newer generation azole with amphotericin B being used less frequently. Voriconazole has good oral bioavailability as well as excellent ocular penetration. This, combined with the limited systemic side effect profile when compared to other antifungals, often makes it the first-line when oral therapy is pursued.[7] It has also been suggested that oral antifungal therapy with second generation azoles can be used as monotherapy in cases of limited fungal chorioretinitis not involving the macula.[10] Recommended dosing with oral voriconazole for systemic therapy is 6 mg/kg for 2 doses, then 4 mg/kg twice daily. The duration of treatment should last for approximately 4-6 weeks, or longer depending on the observed response by funduscopic exam.[10] The infectious disease service is often consulted to assist with dosing and medication administration as well as laboratory monitoring.

Careful observation of the clinical course is warranted and the importance of a multidisciplinary approach to the overall management of the patient should be emphasized.[10] Treatment plans are adjusted throughout the course of the disease and largely depend on changes in visual acuity and clinical exam findings. Fundus photography and B-scan ultrasonography can be used to track disease process and document response to therapy.  Late complications, such as retinal detachment from tears at the edge of the chorioretinal scars, epiretinal membranes, and cataract have been described.[15] Despite the various effective treatment modalities for fungal endophthalmitis, infections due to Aspergillus are some of the most severe and have poorer visual outcomes than infections due to other fungi such as Candida.[3]