An 84-year-old male presented with gradually worsening blurry vision in both eyes (OU), left worse than right, over a period of several years. He described the vision as hazy and poor in dim lighting. He also reported difficulty with reading, driving, or watching TV. He noted worsening glare and halos with lights, making nighttime driving unsafe. 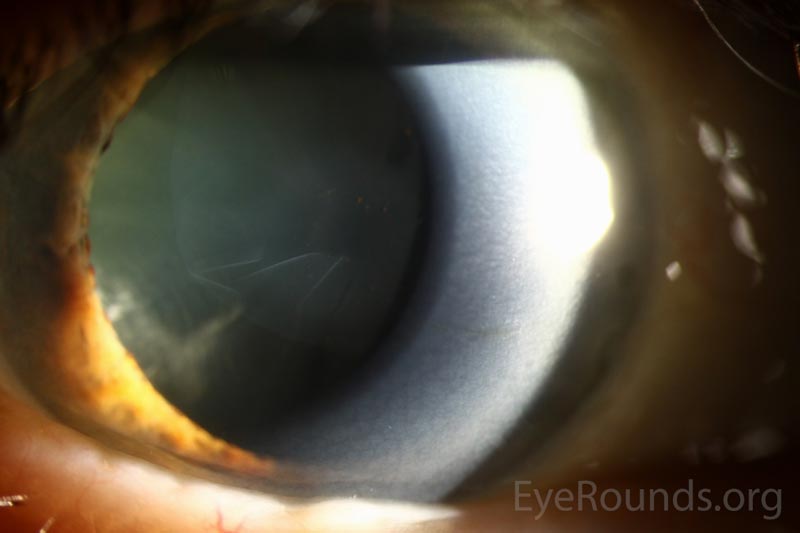 Figure 1: Slit lamp photograph OD demonstrating delamination of the anterior lens capsule with wrinkling of the free-floating flap in the anterior chamber. 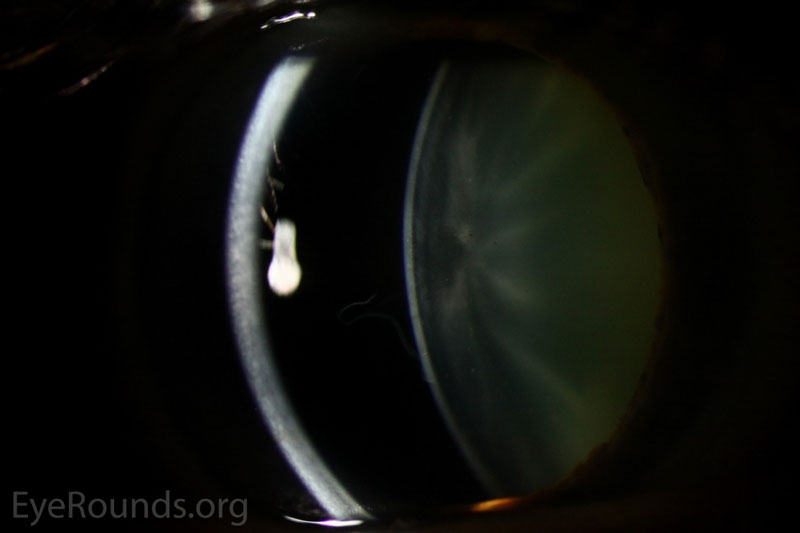 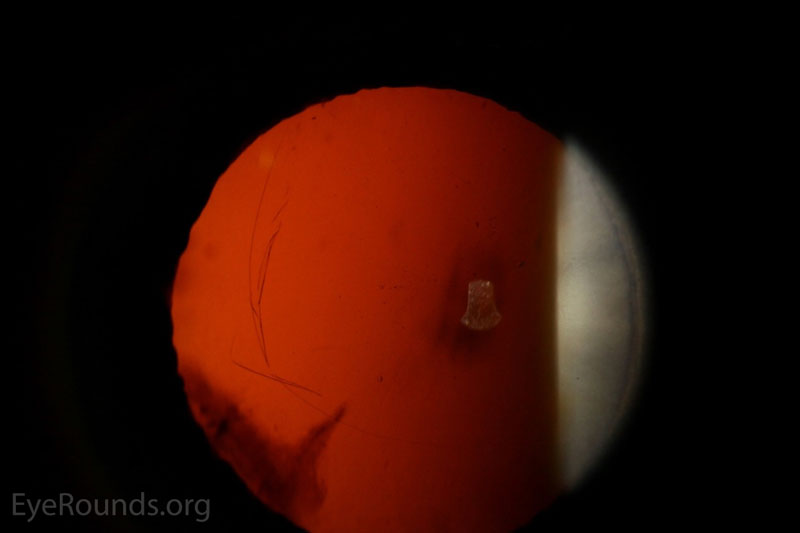 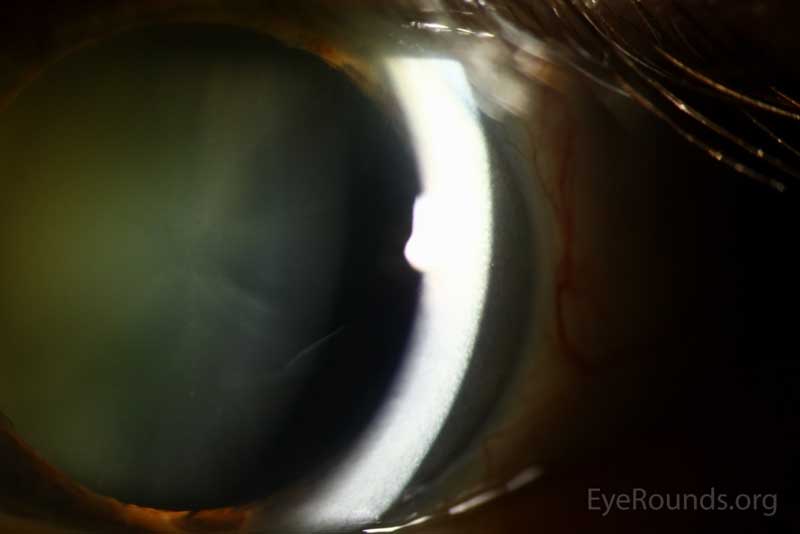 Given the delamination present in the anterior lens capsules that was noted on exam, great care was taken during this procedure, most specifically in performing the continuous curvilinear capsulorrhexis. Trypan blue dye was used to stain the anterior capsule, providing improved visualization. No complications occurred. The patient tolerated the procedures well, and his post-operative visual outcome was excellent.

A video of the surgery is presented below.

The pieces of the lens capsule that were removed from each eye during the capsulorrhexis were submitted for histological analysis, and images of these samples are presented below. (Figures 5 and 6)

Video: The continuous curvilinear capsulorrhexis performed in each eye in this patient. 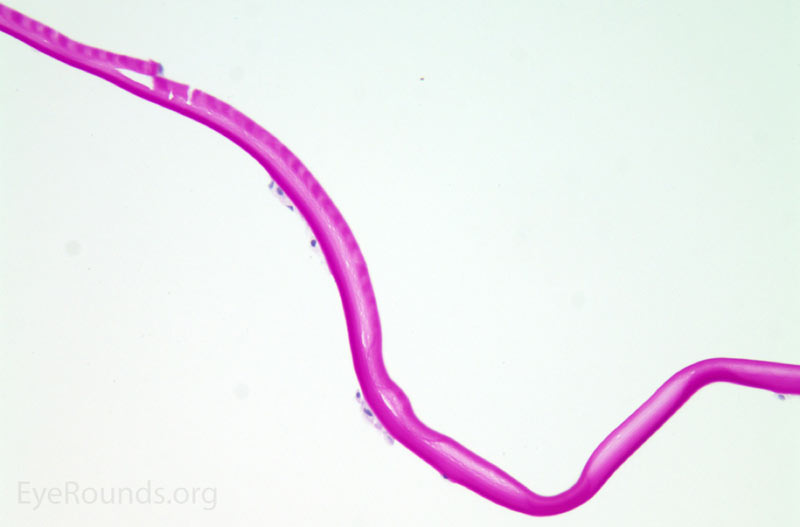 Figure 6: PAS staining of the anterior lens capsule from the left eye showing early delamination of the anterior capsule with schisis cavities forming and beginning to coalesce.

True exfoliation syndrome is a rare disease that was first reported in 1922 by Elschnig; it was initially described in a series of two patients, both of whom were glassblowers [1]. The classic scenario is an asymptomatic glassblower by trade, diagnosed on routine exam. It has been reported in people with other occupational exposures such as steelworkers, blacksmiths, and bakers [2]. The common denominator linking all these professions is excessive exposure to high heat and infrared radiation. However, there have also been reports of exfoliation associated with inflammation, such as uveitis, and trauma [3], as well as cases of idiopathic exfoliation syndrome seen in elderly patients with no identifiable risk exposures [4 ,5].

Given the rarity of the disease, it is difficult to estimate the incidence or prevalence of this condition. One of the largest case series to date by Teekhasaenee et al. demonstrated that 248 out of 259 total cases were idiopathic with no identifiable exposure. In this series, 118 patients were men and 141 patients were women with a combined average age of 75. The overwhelming majority of patients had bilateral disease, and the only statistically significant risk factors identified were age, heat exposure, and trauma [5]. Another smaller case series of 12 patients only identified one with a prior history of infrared exposure or trauma [6]. The mean age at diagnosis in this series was 77.9 and most were bilaterally affected as well, further supporting the idea that this disease is likely age-related in the modern day population. Some suggest a correlation with the development of glaucoma [4], but most recent data has not borne this out to be true. Some literature reports laser energy as a risk factor, such as that received during a laser peripheral iridotomy, but other reports suggest this is not true [5].

The classic theory is that repeated exposure to high levels of infrared radiation causes epithelial damage to the lens capsule with vesicular degeneration. The degeneration leads to capsular dehiscence and schisis, then delamination of the anterior portion of the capsule [3]. It is well known that lens epithelial cells near the equator have the most mitotic activity. These actively dividing cells are also most susceptible to damage from radiation, which may impair the function of future cell generations [2]. It has been shown that areas of zonular disruption are often the location of initial delamination with concomitant progression and zonular damage [5]. Another theory is that the thermal injury directly activates enzymes that are responsible for proteolysis of the collagen in the capsule [7].

There are often no symptoms reported by the patient when exfoliation occurs, and the diagnosis is commonly made as an incidental finding during physical exam [6]. This is a relatively benign process with the delamination occurring only anteriorly. The integrity of the lens capsule remains intact with no intra-ocular exposure to lens material. True exfoliation can present as a very small linear rent, a very large free-floating flap, or anywhere in between, based on the extent of delamination present [5]. One of the classic signs is known as the double-ring sign (DRS). The DRS is seen when partial splitting of the anterior capsule occurs, giving the appearance of two rings on the capsule [8]. The DRS is diagnostic for true exfoliation syndrome. Another name for this sign is capsulorrhexis masquerade, as it can mimic a partial capsulorrhexis with a free-floating flap of delaminated capsule when DRS has progressed far enough [5]. It is also possible to develop a double delamination where the delaminated flap can split again resulting in parallel flaps [5]. Pigment deposition on the delaminated membrane is a common finding, seen in 68.7% of patients in the case series by Teekhasaenee and colleagues [5].

The diagnosis is clinical. There are currently no blood tests available to aid in identifying this disease. There is also no known underlying genetic association at this time. Tissue evaluation of the anterior lens capsule after surgical removal during cataract extraction is a common method for definitive diagnosis. When evaluated via histology, the section through a lens capsule with true exfoliation syndrome shows a thinned residual capsule, due to loss of tissue from delamination, with an abnormal underlying epithelial layer [2]. Epithelial cells become smaller and spaced out, but the overall thickness of the capsule, when including the delaminated portion, is increased [2 ,9]. It is possible to see vesicles within the capsule, and the area of splitting often coincides with the highest areas of vesicle concentration [2]. If the capsule sample is well preserved and a portion of the delaminated tissue still attached, the specific area of dehiscence can be seen [2].

Numerous recent diagnostic instruments have been used in identifying and investigating exfoliation syndrome with several recent publications documenting the potential benefits. For example, the Pentacam® will provide a cross-sectional image of the anterior chamber and can be used to visualize a floating membrane attached to the anterior capsule [10]. Anterior segment optical coherence tomography (OCT) has also been used to identify true exfoliation, and numerous sources have reported clear display of the split in the capsule with membrane floating in the anterior chamber [2,11]. Newer spectral domain OCT can provide such fine resolution, it may be able to detect subclinical delamination of the anterior capsule prior to developing free-floating flaps [11].

True exfoliation of the capsule typically presents no acute issues. As such, it is appropriate to monitor these patients on a routine basis.

Some have proposed grading systems based on the extent of delamination and location of the flap, with the most detailed criteria put forth by Teekhasaenee and colleagues [5]. Clinically, however, there is limited benefit of a breakdown into stages given the lack of impact on management and prognosis. The benefit of staging is that it recognizes the disease is not a static process, and it can be useful in quantifying the extent of exfoliation when presenting early on, as well as documenting the progression.

The major significance of exfoliation is in surgical management and complications during cataract surgery. True exfoliation can make capsulorrhexis difficult and can predispose to radial tears [2,5,10,12]. A radial tear can occur in either the deep or superficial portion of the split capsule [12]. Trypan blue can be used to aid in visualization of the capsule. If possible, the final size of the capsulorrhexis should be larger than the delaminated portion in order to remove all split and weakened tissue [11].

True exfoliation has also been reported to have a relatively high prevalence of phacodonesis and lens dislocation, seen in approximately 10% of patients [5]. This can depend somewhat on the initial location of the split, with more peripheral tears predisposing to zonular weakness.

It is also possible to have true exfoliation concurrent with pseudoexfoliation [13].