Conjunctival rhinosporidiosis in a temperate climate

Left medial canthal lesion for the past one month

A 27-year-old male patient was referred to the Oculoplastics clinic at the University of Iowa Hospitals and Clinics for evaluation of a left medial canthal lesion. The patient was unsure of the exact length of time the lesion had been present, but he first noticed it about one month prior to presentation. He reported that he had been unconcerned until a friend noted that it was getting bigger. The patient denied any blurriness or change in vision. He also denied pain, bleeding, drainage, or tearing. He presented with no other systemic symptoms, except for a recent upper respiratory infection. He denied any history of trauma, foreign travel, or close contact with animals. In retrospect, his history was notable only for swimming in stagnant water at a local rock quarry.

Past Medical History: None

Social History: Pertinent elements are detailed in the history of present illness.

Review of Systems: Negative except for what is detailed in the history of present illness. 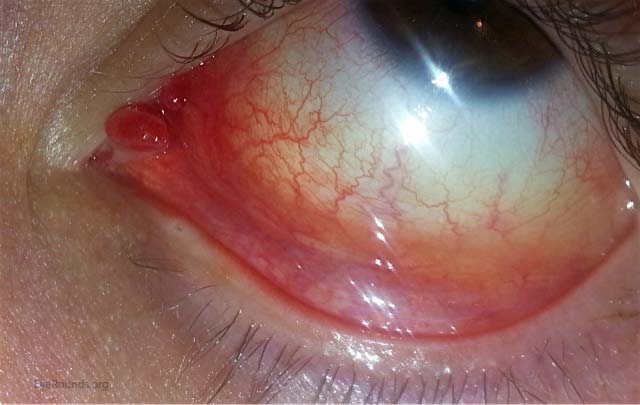 The patient underwent an excisional biopsy under local anesthesia. Microscopy revealed conjunctiva with mild epithelial hyperplasia and multiple sporangia in various stages of development and regeneration (Figure 2a). Inflammatory cells surrounded the sporangia, including neutrophils, lymphocytes, plasma cells, and multinucleated giant cells. Periodic acid-Schiff (PAS) stain highlighted the thick walls of the sporangia in various stages of the life cycle (Figure 2b). Mature sporangia revealed a surface pore with release of spores (Figure 2c). Gomori methenamine silver (GMS) stained the wall of the mature sporangium (Figure 2d). These findings were consisted with rhinosporidiosis.

The patient was seen in follow-up approximately 6 months later with recurrence of the lesion. At that time, repeat excision with cautery was performed. Consideration was given to dapsone treatment following the excision, but the patient declined. Follow-up 7 months later revealed no signs of recurrence.