Options for surgical management of ectropion

A 72-year-old male presents with epiphora of the left eye.  This has been present for one year, but has worsened over the last month.  He also describes a foreign body sensation in both eyes as well as redness along the left lower eyelid.  He denies any history of trauma, skin cancer, surgery, use of topical medications, or significant sun exposure. 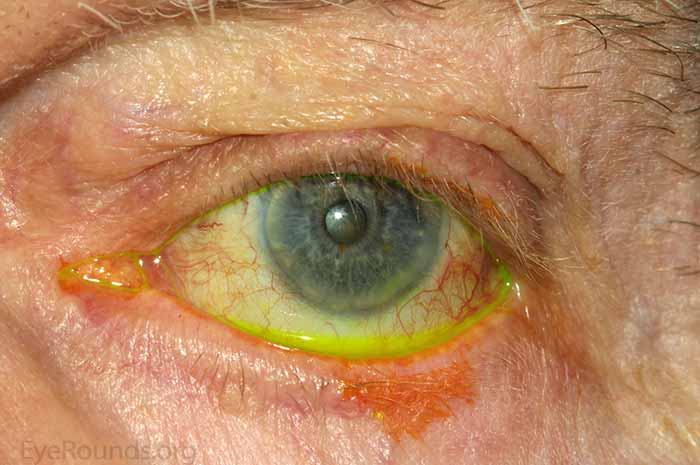 Figures 1 (top) and 2 (bottom): Lower lid laxity with more inferior scleral show on the left compared to the right eye.

The patient underwent ectropion repair with a lateral tarsal strip (LTS) and inverting sutures.  Figure 3 shows the post-operative appearance 7 years after the procedure was performed, which illustrates continued stability of the lower lid.

Ectropion is one of the most commonly encountered eyelid disorders seen in ophthalmology.  It is classified into several different categories including involutional, cicatricial, paralytic, mechanical, and congenital.  The most common entity causing this disorder is involutional ectropion.  Patients with this disorder frequently experience symptoms of ocular irritation including redness, discharge, papillary conjunctival reaction and corneal epitheliopathy.  Exposure of the palpebral conjunctiva causes conjunctival inflammation and poor lower lid protraction may result in inferior corneal exposure.  Findings on examination which support the diagnosis of involutional ectropion include poor apposition of the eyelid to the globe, poor snap back test (inability of the eyelid to return to its normal position apposed to the globe after being manually pulled away), positive distraction test (ability to pull eyelid >6mm from the globe), and outward turned lashes.  Involutional ectropion should be considered a diagnosis of exclusion in the sense that there should be no anterior lamellar shortening, mechanical cause, or orbicularis weakness to explain the exam findings.  One should look closely for these other potential causes of ectropion prior to performing surgical repair.

The most common anatomic changes leading to involutional ectropion are horizontal eyelid laxity, lamellar dissociation, and retractor disinsertion.  Other entities such as a large tarsus, relative proptosis, and maxillary hypoplasia may play a role as well.  Findings which suggest retractor disinsertion include a white line in the inferior fornix below the tarsus, a deep inferior fornix, and little to no movement of the lower eyelid on downgaze.

It is well understood that using a combination of these procedures, when indicated, is a fantastic way to achieve excellent functional and aesthetic outcomes. As noted above, a lateral tarsal strip will almost always be performed in conjunction with a medial spindle, retractor reinsertion, or inverting sutures (in order of increasing severity of the ectropion) (6).

Cicatricial ectropion is usually associated with shortening of the anterior lamellae.  It can be caused by prior surgical resections of tissue, burns (thermal or chemical), actinic damage, autoimmune disease, or chronic inflammation (rosacea, dermatitis).  Treatment is centered on release of cicatricial changes, followed by horizontal tightening, and then repair of the shortened anterior lamella (skin grafts, midface/cheek lift).   A periosteal strip can be used as well to provide more firmly anchored lid in tough cases (7).   The midface/cheek lift can be performed with a dissection in the pre periosteal space and suture fixation to the periosteum or subperiosteal plane with the use of a fixating device (endotine midface B) or drilling holes in the inferior orbital rim and suture fixating for more severe cases.

Mechanical ectropion refers to a situation in which a mass on the lower lid is pulling it down/away from the globe.  This is usually a pretty obvious diagnosis and treatment is based on removing the mass.

Although lower lid malposition associated with facial paralysis has been classically described as an ectropion, many surgeons now recognize this malposition as a retraction due to the unopposed action of the lower lid retractors.  In this situation, horizontal tightening with a lateral tarsal strip combined with recession of the lower lid retractors and placement of a spacer corrects the malposition. For more information regarding eyelid malposition in the setting of a facial nerve palsy, please see this associated case and discussion.

Below are instructional videos by Dr. Richard Allen demonstrating how these procedures are performed along with written, step-by-step instructions.

Medial spindle with lateral tarsal strip for repair of ectropion

Start this procedure with the LTS, but wait to tie sutures to the lateral orbital rim until the medial spindle is performed.

The different steps using the transconjunctival approach are listed here.

These videos and descriptions of surgical technique are created to help surgeons understand repair of ectropion.  As a surgeon, one has many options for repair of involutional ectropion.  Careful selection of the combination of procedures is key for excellent functional and aesthetic outcomes.