Acute presentation and recurrence in a 4-year-old female

The patient is a 4-year-old female patient who was referred to the pediatric ophthalmology and strabismus clinic at the University of Iowa for evaluation of a bump of the right lower lid. The parents first noticed it about two weeks prior. There was no recollection of prior trauma or insect bites to the area. They were seen at their local family care center and were given oral Bactrim (trimethoprim/sulfamethoxazole). The patient had taken the medication for four days, but there was no improvement of the area. The patient was acting well and did not report any pain in the area.

No other ocular history.

Normal growth and development and no history of illness.

The patient lives at home with her parents.  She does not have siblings. The family recently moved to Iowa from Florida.

A complete review of systems is negative except as in HPI.

The patient was diagnosed with a chalazion of the right lower eyelid. She was sent out with a plan for conservative management including warm compresses and topical erythromycin ointment. She was seen for follow-up 10 days later with continued enlargement of the lesion, so she was taken to the operating room for incision and drainage.

Following the procedure, the chalazion appeared significantly improved (Figure 2) and it eventually resolved completely. She presented again nine months after her initial presentation, this time for a left upper lid lesion, also thought to be a chalazion (Figure 3), which later resolved with conservative treatment. 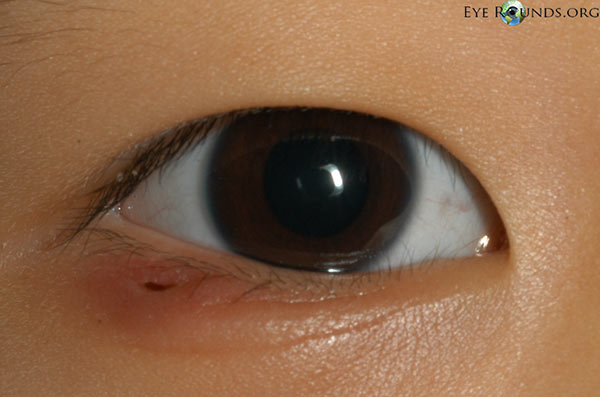 Figure 3. Clinical appearance 9 months after incision and drainage of the initial lesion.  Note the complete resolution of the chalazion on the right lower lid.  Since the procedure, the patient developed a large left upper lid chalazion which later resolved with conservative treatment.

A chalazion is a localized, lipogranulomatous lesion of the eyelid. It is an inflammatory process, caused by an obstruction of the sebaceous glands of the eyelid (meibomian and Zeiss) from inflammatory disease (eg, acne rosacea), infection (eg, seborrheic dermatitis), or neoplasm (eg, sebaceous gland carcinoma or Merkel cell carcinoma) (1). This obstruction causes secreted lipids to accumulate and leak into the collagenous stroma of the tarsal plate, triggering an immune reaction first made up of neutrophils, and later lymphocytes, plasma cells, macrophages, mononuclear cells, eosinophils, and multinucleated giant cells. Pathology of the lesion shows that acutely it presents with a suppurative pattern (mainly neutrophils), but may develop into a more chronic granulomatous pattern over time (2).

A chalazion is the most common inflammatory lesion of the eyelids (3). Patients often present with a persistent (often more than 2 weeks), initially painless nodule in the eyelid (Figure 4). The lesion may grow and distort the lid causing discomfort in the surrounding tissue (4). Chalazia can induce reversible vision changes from astigmatism and corneal irregularly due to compression of the cornea (5). This presentation is fairly consistent; a retrospective study of over 1000 cases showed that ophthalmologists are able to correctly diagnose chalazia by clinical symptoms nearly 94% of the time (3). 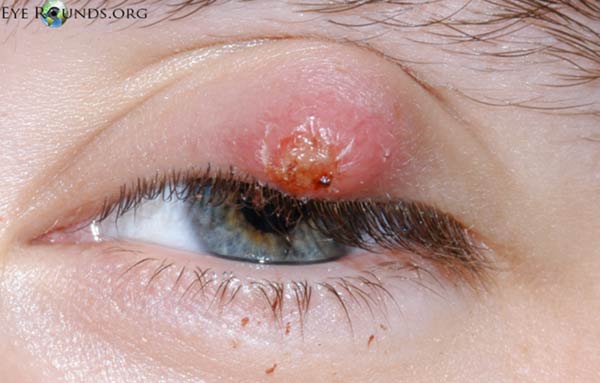 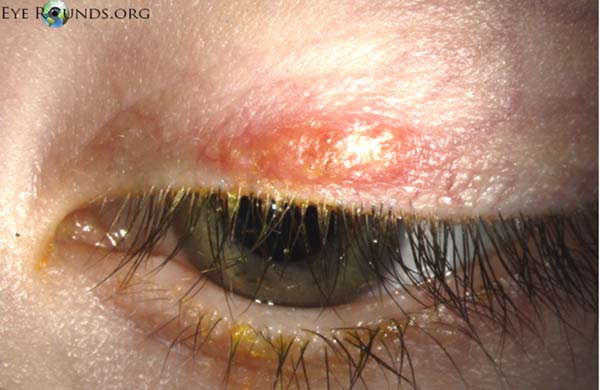 Other lesions can look similar to a chalazion, however in the setting of recurrent or difficult to treat chalazia in older patients, it is important to rule out neoplasm (6). One common mimic is sebaceous cell carcinoma. This also presents most commonly as a small, rubbery, firm nodule, and diagnosis is further complicated because sometimes there is true chalazion formation secondary to obstruction of the meibomian ducts from the carcinoma (7). Another lesion that can present similarly to a chalazion is a hordeolum (commonly referred to as "stye"). Although a chalazion and hordeolum are similar clinically, the underlying pathology is different. An internal hordeolum is an actute, painful, inflamed lesion near the eyelid margin caused by infection (predominantly staphylococcal) of the tarsal meibomian glands, which leads to a small abscess. An external hordeolum is also an abscess (predominantly staphylococcal), but it is located in the eyelash follicles and surrounding sebaceous and apocrine glands (Zeis and Moll) (1).

Although many patients wait for an acute chalazion to heal without any intervention, there are reports that this only occurs roughly 25-50% of the time (8-9). For patients that present to clinic, depending on how advanced the lesion is at presentation, most ophthalmologists recommend a trial of conservative management before surgical intervention. Conservative management includes some combination of frequent warm compresses, massage of the lesion, and lid scrubs. This increases clearance of acute inflammation to 40-80% (10-11).

If a patient fails conservative management, the two most common interventions are steroid injections and incision and drainage (I&D). Steroid injections are usually performed with triamcinolone acetomide which may be injected transcutaneously or transconjunctivally. Steroid injections are effective at reducing the size of the lesion or curing it completely 60-84 % of the time with one treatment (9, 12-14), but success increases to as high as 77-89% with two or more injections (9, 15). The most common adverse reaction to this treatment is skin depigmentation (particularly in darkly pigmented patients), but using a transconjunctival approach to injection reduces this risk. Other possible risks include atrophy of the orbital and subcutaneous fat, increased intraocular pressure, and accidental intraocular injection, and permanent vision loss from vascular occlusion (13, 16). This treatment is less invasive than I&D but because of the risk of vision loss, is not preferred treatment choice at the University of Iowa.

After failure of conservative measures (e.g., warm compresses), the preferred treatment at the University of Iowa is incision and drainage (Figure 5) and not steroid injections. This is performed by securing the lesion with a chalazion clamp, everting the eyelid, opening the conjunctiva over the lesion with a scalpel, and curetting out the granulomatous substance inside (Video 1). Risks of the operation include infection, bleeding, and damage to lid structures. Older children and adults can often undergo the procedure under local anesthesia, but general anesthesia is required in young children. It is highly effective; there is improvement of the lesion or complete resolution at a rate of 79-87% with a single operation (9, 12, 13) and as high as 90% with two operations (13, 15). There is reported to be an increased rate of complete resolution or "cure" compared to steroid injections (17). An additional benefit of I&D is that tissue may be sent to pathology to confirm the diagnosis, which is particularly useful in situations where the lesions are recurrent or clinically do not appear clearly to be a chalazion. Even with appropriate treatment of chalazia, recurrence is common.  It is difficult estimate the incidence however, as patients with resolution are often lost to follow up and chalazia can recur years after treatment, thus requiring a study with a very long follow up period.  One study by Sendrowski and Maher showed that 22-26% of patients who have one chalazion treated with incision and drainage developed recurrence during the course of a two-year follow up period (18).

Figure 5. Procedural photographs for the incision and drainage of a chalazion. (A) Draping of the patient with sufficient exposure of the lesion in the left upper lid. First, the eye is anesthetized topically.  Then a mixture of lidocaine and epinephrine is injected into the eyelid to provide local anesthesia. (B) A chalazion clamp is placed and tightened with the lesion in the center of the ring and the eyelid is everted. This exposes the lesion and helps with hemostasis. (C) A size 11 scalpel blade is used to incise across the center of the lesion, dissecting down to the level of the tarsal plate. (D) The lesion may be opened with a single, vertical incision as shown here, or with two perpendicular incisions forming an "x" shape. We usually prefer the single incision as there is less potential for disruption of adjacent meibomian glands. (E) Some contents may be drained with gentle pressure from a cotton tip applicator. (F) A curette is inserted into the lesion to thoroughly excise the remaining contents and break adhesions. Westcott scissors may be used to remove any excessive scar tissue within the lesion. Gentle electrocautery may be used to assist with hemostasis. The clamp is then removed and the incision is left open to encourage further drainage.

Video 1. Video demonstration of chalazion incision and drainage. If video fails to load view on YouTube