History of Present Illness: Patient complained of a painless, red lesion noticed on the left lower lid (LLL) for 4-6 months. He was not sure if the lesion had grown in size, but wanted an evaluation because the lesion has not resolved. 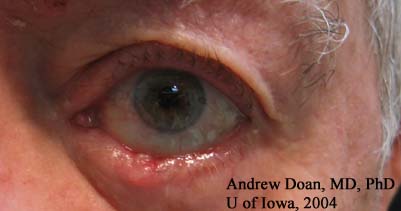 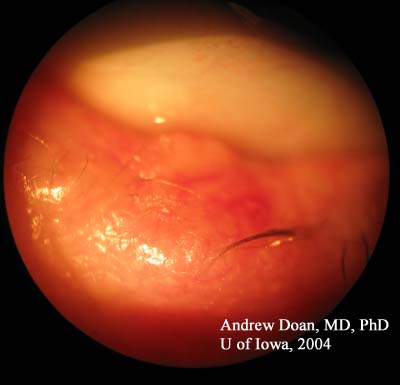 SLE Photo of the LLL lesion, lid margin & palpebral conjunctivae. Note the telangiectasia of the lesion, disruption of the lid margin, and hyperemia. Borders of this lesion are indistinct. 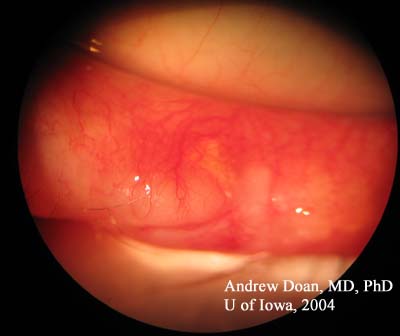 This patient was diagnosed initially with a chalazion. When warm compresses and lid hygiene failed to resolve the LLL lesion, a full-thickness wedge biopsy was performed. We should be concerned about sebaceous cell carcinoma (SCC) and masquerade syndrome because SCC can be difficult to diagnose and detect. If one is concerned about SCC, the ocular pathologist should be informed so that oil red-O stain will be used to detect presence of lipid. Because SCC can be missed on frozen section, half of the specimen was sent for frozen section evaluation and the other half of the specimen was sent for histopathology.

The pathology report was consistent with morpheaform basal cell carcinoma (BCC). In morpheaform BCC, instead of bulky tumor nodules, there are slender strands of tumor cells. Morpheaform BCC is the most aggressive of all the BCC types: nodulo-ulcerative (most common), pigmented, morpheaform, and superficial.