Distorted vision in the right eye

A 69-year-old woman presented for evaluation of decreased vision and "wavy lines" in the right eye for approximately one week. She was sitting comfortably, watching TV in the evening when the visual changes occurred. Her symptoms were stable since onset. She denied any photopsias or floaters.

Pathologic myopia, retinal detachments in both eyes treated with scleral buckle procedure in 1967, cataract extractions in both eyes in 2006, anterior uveitis left eye

Figure 1. Clarus color fundus photograph of the right eye. There is a subtle hemorrhage in the superotemporal macula overlying an area suspicious for a lacquer crack (arrow). The fundus demonstrates many signs characteristic to high myopia including a tilted disc, peripapillary atrophy, and macular atrophy. There are chorioretinal scars in the inferonasal periphery. 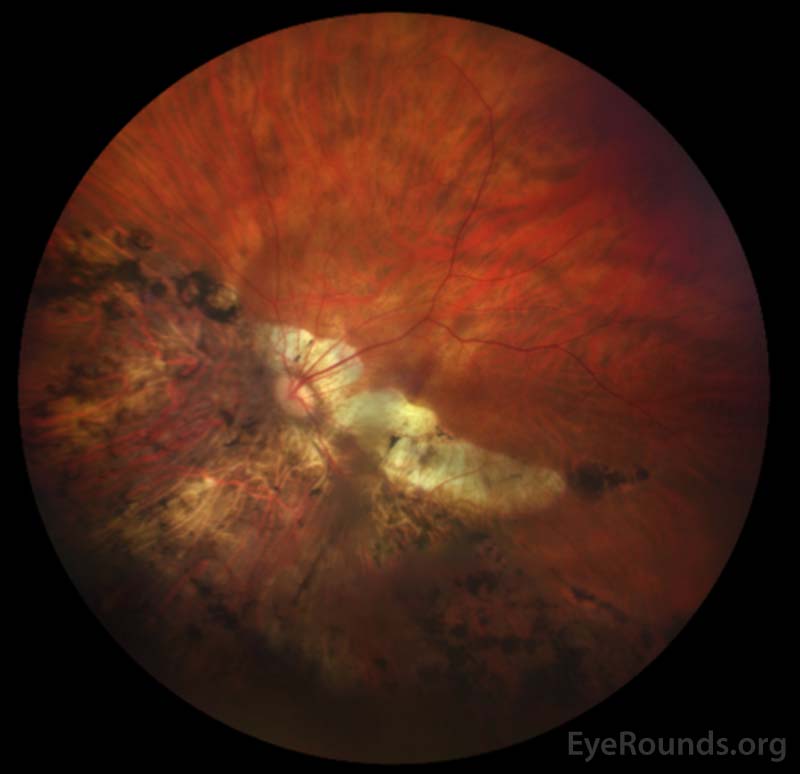 Figure 2. Clarus color fundus photograph of the left eye demonstrating signs of high myopia and prior retinal detachment. No retinal hemorrhages are present.

This patient was diagnosed with a choroidal neovascular membrane (CNVM) overlying a lacquer crack (break in Bruch's membrane). She was treated with a series of three bevacizumab injections that resulted in resolution of the CNVM as demonstrated in the repeat OCT below, obtained three months later. Her visual distortion nearly completely resolved.

Figure 4. OCT macula three months following presentation after anti-VEGF therapy. The CNVM has resolved and there is some mild outer retinal atrophy in the area (arrow).

Choroidal neovascularization in the right eye secondary to pathologic myopia

There is no consensus definition of the term pathologic myopia. Many studies define high myopia (HM) as -5.00 to -8.00 diopters axial myopia or >26.0 mm to >26.5 mm axial length and pathologic myopia (PM) as HM in addition to lesions or degenerative fundus changes that result in decreased best corrected visual acuity.[1, 2] We will use the abbreviations HM and PM in this article. When lesions occur in the posterior pole, it can be termed myopic maculopathy. In 2015, Ohno-Marsui et al. proposed a classification system for myopic maculopathy based on fundus appearance in addition to "plus lesions," which included lacquer cracks, choroidal neovascularization, or Fuchs spots.[3]

In the last half-century, there has been a rapid increase in the rate of myopia worldwide, particularly in East Asia and Southeast Asia.[4]  The estimated economic burden of productivity lost due to myopia was nearly 270 billion dollars in 2007, with the Western Pacific and Southeast Asia accounting for over half of these losses.[5] In the United States, the estimated economic burden is 250 million dollars annually.[6] Table 1 lists the prevalence of myopia, high myopia, and pathologic myopia in middle-aged and elderly adults in Western populations compared to Asian populations.  The number of individuals affected by myopia is only expected to increase in the coming years. In one study looking at Taiwanese school children in 2000, 84% of 16- to 18-year-olds were myopic with 21% of 18-year-olds being highly myopic (defined as >-6.00 diopters).[7] Meta-analyses of epidemiologic data on PM suggest that by 2050, half of the global population may be myopic.[1] This implies that the degenerative changes associated with pathologic myopia will only increase.

There have been a multitude of genetic linkage studies that have identified myopia susceptibility genes. Epidemiologic studies have also identified risk factors for myopia such as increased time indoors and concentrated near work, but these remain just theories as they have been difficult to duplicate across multiple populations.[9] There are numerous systemic diseases associated with PM including Down syndrome, Stickler syndrome, Marfan syndrome, retinopathy of prematurity, Noonan syndrome, Ehlers-Danlos syndrome, and Pierre-Robin sequence.[6]

The main driving force behind PM is mechanical stretching of the eye. Theories proposed to explain excessive elongation include emmetropization and abnormalities in structural proteins in the wall of the eye, such as collagen.[10] The sclera, choroid, and retina are stretched and thinned as the eye reaches excessive axial lengths, which leaves the eye prone to deformation.[11] A review of nearly 650 eyes with high myopia (defined as >6.oo diopters of myopia) revealed that increasing age and increasing magnitudes of myopia were the most important risk factors for the development of myopic maculopathy.[12] This association between the severity of pathologic myopia and increasing axial length and age has been re-demonstrated in multiple other population studies.[11] Age and axial eye length are also risk factors for the development of posterior staphyloma (discussed in more detail below), which is an important association because studies suggest that myopic macular lesions are much more likely to develop in the presence of a staphyloma compared to non-staphylomatous eyes.[13, 14] The retina and choroid become thinned and fragile leading to chorioretinal atrophy, RPE atrophy, lacquer cracks (discussed in more detail below) and other macular changes that lead to vision loss.[10]

As alluded to above, there are many physical examination findings that are characteristic of the myopic fundus. It is important to identify and differentiate these lesions, as they can be important for visual prognosis and establishing appropriate follow up to monitor for vision-threatening sequelae.

Patients with HM or PM will have significantly blurred distance vision without corrective lenses. Other symptoms in PM depend upon the location of pathology but could include blurred vision despite correction; metamorphopsia or central scotoma (CNV, myopic foveoschisis); or curtain-like vision loss, photopsias, or floaters (retinal detachment). 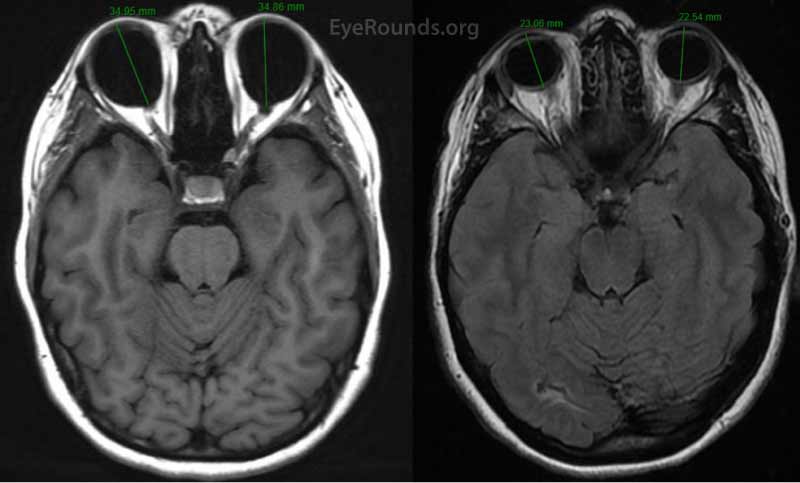 Figure 5. MRI of two patients. Patient A (left) has pathologic myopia and an elongated axial eye length that is obvious when compared to age and sex-matched Patient B (right) who has normal globes.

Dome-shaped macula is a convex elevation within the macula that is housed within a posterior staphyloma. It is identified most clearly on OCT as it difficult to detect on fundus examination or ultrasonography. Dome-shaped macula is associated with higher degrees of myopia. Patients with dome-shaped macula are more likely to have RPE atrophic changes and localized serous retinal detachments.[13, 16]

Thinning of retina and choroid

Large population-based studies have demonstrated that highly myopic eyes are prone to thinning of the retina and the choroid.[17] This is demonstrated in Figure 3.

The myopic fundus can appear tessellated due to retinal pigment epithelium thinning, which makes the choroidal vasculature more visible (Figure 6).[3]

Chorioretinal atrophy is degeneration of the neural retina and choroid. This atrophy can be diffuse (Figure 7), which gives the entire posterior pole a white-yellow appearance or patchy, with well-defined gray-white lesions of atrophy.[3]

These are mechanical breaks in Bruch's membrane. They appear as yellowish, linear lesions in the macula (Figure 9). Retinal hemorrhage can develop at the site of a new lacquer crack and may appear as subretinal "coin hemorrhages."[3] Choroidal neovascularization can also develop at a lacquer crack.

CNV in the myopic fundus is often associated with a lacquer crack. There is also usually significant chorioretinal thinning at the site of the CNV.[3, 18]

This is a pigmented, raised scar caused by intraretinal or subretinal hyperplasia that likely represents the location of a spontaneously regressed CNV.[3]

This is a separation of the inner and outer neural retinal layers. Macular retinoschisis may precede formation of a full-thickness macular hole.[18]

The optic nerve and peripapillary region are also prone to deformation due to the mechanical stretch caused by axial elongation. A tilted optic nerve is common in addition to peripapillary atrophy. There is also a well-known increased risk of primary open angle glaucoma (POAG). Glaucoma should be monitored for closely, especially in patients with abnormal-appearing optic nerves, since cupping may not be visible.[14]

The association between myopia and cataract remains controversial. A large meta-analysis performed in 2013 showed an increased prevalence of nuclear and posterior subcapsular cataracts in 7 cross-sectional studies and 1 case-control study. Conversely, three of the cohort studies analyzed revealed no significant increased incidence of cataract in myopia.[20]

Prior to the advent of OCT, the internal structural changes of highly myopic eyes could only be studied post-mortem.[17] With OCT, there have been dramatic advancements in the identification of myopic changes including thinning of the retina and choroid, posterior staphylomas, dome-shaped macula, chorioretinal atrophy, lacquer cracks, and choroidal neovascularization.[17] Fluorescein angiography and indocyanine green angiography can aid in the identification of lacquer cracks and choroidal neovascularization. Ultra-wide-field fundus photography is also useful in identification and monitoring many of these lesions. Ultrasonography is helpful for identifying posterior staphylomas and dome-shaped macula.

Routine screening is required in patients with HM (spherical equivalent of ≤-6.00 D or an eye with an axial length of >26 mm). For patients with HM but no signs of PM, screening every 6-12 months is recommended. These visits should include a detailed exam of the fundus including the far periphery. Additionally, OCT and ultra-wide-field fundus photography should be performed.[3,11] Patients with PM should have a formal glaucoma evaluation since the risk of POAG is increased and evaluation of the optic disc is often challenging.

Myopic CNV is a common cause of central vision loss, affecting 5-11% of patients with PM.[3,12] This vision loss can be reversed with intravitreal anti-VEGF agents. The RADIANCE TRIAL demonstrated the superiority of anti-VEGF therapy over photodynamic therapy.[21] The MYRROR trial was a randomized controlled trial that studied aflibercept for the treatment of myopic choroidal neovascularization. This study demonstrated that early initiation of aflibercept injection improved visual outcomes and limited the number of injections needed to control CNV.[22] The REPAIR study was a prospective study that demonstrated the effectiveness of ranibizumab in treating myopic CNV with over 80% of patients achieving improved vision, with most letters gained after the first injection.[23] Bevacizumab has also been demonstrated to be effective for the treatment of myopic CNV with most patients requiring 2 injections or less for effective control.[24]

Pathology such as macular hole and myopic foveoschisis require referral to a vitreoretinal surgeon for a discussion of surgical management options including vitrectomy and membrane peeling.[14]

Some groups advocate for surgical treatment of posterior staphylomas using scleral reinforcements with donor sclera, fascia lata, or tendon. However, the efficacy of clinical trials involving scleral reinforcement has varied and the long-term effects remain unclear.[25] There are ongoing experiments using animal models for scleral collagen cross linking, but no clinical trials have been performed in humans at this time.[26]