A 22-year-old female presented to the comprehensive eye clinic with two weeks of right-sided tearing and one week of progressive right periorbital swelling.  She had associated right eye pain with right gaze but denied any diplopia. She reported right-sided facial pressure, numbness, and nasal obstruction but denied any history of sinus disease, allergies, facial trauma, or dental disease. She did not notice any changes in her vision. CT orbit and maxillofacial scan obtained previously showed a large right soft-tissue mass centered in the maxillary sinus with bony remodeling and erosion of the ethmoid air cells, hard palate, and inferior orbital wall. She was referred to the oculoplastics service for urgent evaluation.

Figure 2. Pre-operative Goldmann visual fields demonstrated a superotemporal constriction of the I2e and I3e isopters with baring of the blind spot in the right eye and a full visual field in the left eye. 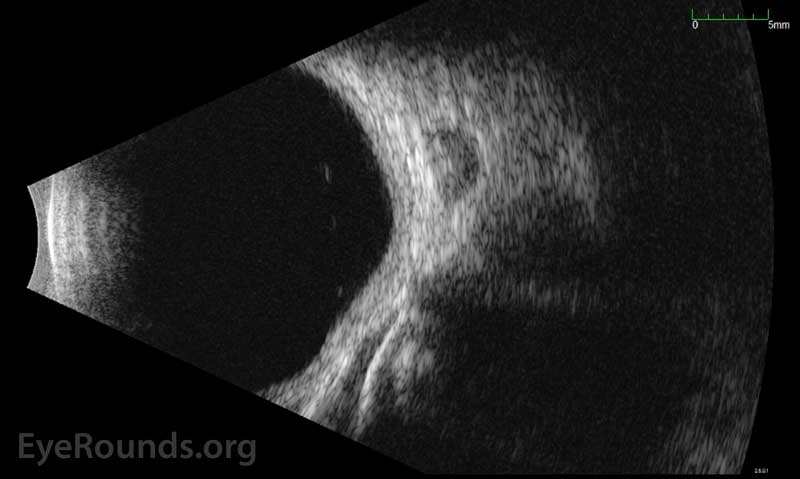 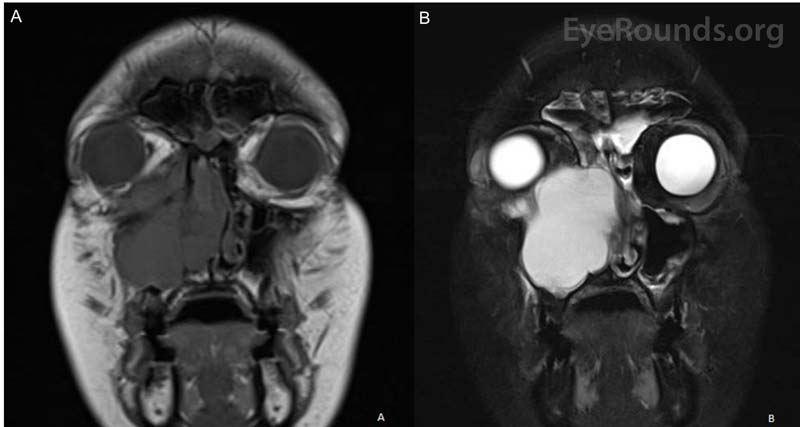 Figure 5. MRI of the face and sinuses with and without intravenous contrast demonstrating a right-sided mass centered on the maxillary sinus abutting the orbit exhibiting no enhancement on T1 (panel A) and enhancement on T2 (panel B).

Based on the patient's presentation and imaging findings, namely a soft-tissue mass centered in the maxillary sinus with bony remodeling with hyperintensity on T2 MRI, a diagnosis of maxillary sinus mucocele was reached. This soft tissue mass eroded into the right orbital floor, extending into the right extraconal space. The Ophthalmology and Otolaryngology services were both involved in the excision of the mass via a transnasal endoscopic approach under imaging guidance. The mass was first marsupialized at the level of the inferior meatus and its contents were suctioned free for deflation. An extended maxillary antrostomy was then performed. Much of the medial maxillary wall had been remodeled by the mass. There was no extension of the mucocele to the dura. In order to free the mucocele from its surroundings, an endoscopic medial maxillectomy, total ethmoidectomy, and frontal sinusotomy were performed.  The walls of the mass were subsequently peeled free from their abutments to bone. In order to remove the superior wall of the mucocele, an orbitotomy via a transconjunctival incision through the caruncle and lower lid was performed. The mass also abutted the nasolacrimal duct, which was probed with placement of Crawford stents.

On post-operative day one, the patient's vision in the right eye had improved to 20/25 and her extraocular motility was full. Post operatively, the patient was placed on 3 weeks of amoxicillin / clavulanic acid. There was expected enophthalmos and she was consented for future orbital floor reconstruction.

Mucoceles of the paranasal sinuses are epithelial-lined, mucus-containing sacs inside a paranasal sinus. They typically arise from chronic inflammation, scarring or surgical manipulation resulting in obstruction of the sinus ostia, although a compartment of a septated sinus can similarly become obstructed [1]. They are expansile and can cause bony erosion; therefore, they must be removed or drained to prevent intracranial and orbital extension [2].

Mucoceles may occur at any age with no sex predilection, however, higher incidence is noted between the third and fourth decades of life. The originating sinus is known to vary significantly by patient population, but in a recent case series of 33 patients, the most common site was the ethmoid (45.5%), followed by the maxillary (18.2%), sphenoid (9.1%), frontal (6.1%), and frontoethmoid sinuses (6.1%) [3-5]. Patients with mucoceles of the ethmoid and sphenoid sinuses are most likely to first present to an ophthalmologist due to their proximity to orbit.

The most common ophthalmologic manifestations of paranasal sinus mucoceles are periorbital swelling or pain, exophthalmos, and visual disturbance [7]. Patients may complain of nasal congestion, facial pain or pressure. Some patients' complaints may be mistaken for conjunctivitis or a preseptal or orbital cellulitis [8]. Orbital involvement can present as diplopia, exophthalmos, and globe displacement. Intracranial extension may present as meningitis or a CSF leak. Data on mucocele-associated compressive optic neuropathy is limited, but pre-operative visual acuity has been suggested as a useful predictor of post-operative acuity [7].

Workup for mucoceles should include a complete eye exam. It may be beneficial to obtain formal visual field testing, critical flicker fusion, optical coherence tomography, and/or orbital ultrasound. Referral to an otolaryngologist for a complete head and neck exam and surgical planning is required. Imaging studies should include a maxillofacial CT without contrast and an MRI head/brain with contrast. MRI will typically reveal variable intensity on T1, with relatively new mucoceles appearing hypointense and gradually becoming more hyperintense as mucus becomes more inspissated with chronicity. T2 weighted images show a hyperintense mass [9].  Histopathologically, mucoceles have features of respiratory mucosa with areas of reactive bone formation, hemorrhage, fibrosis, and granulation tissue [9].

Treatment relies on surgical removal. Traditionally, an open surgical approach has been used to facilitate complete removal of the lining of the mucocele. This practice needs to be done with caution, particularly for mucoceles that have eroded through the skull base or the lamina papyracea. The lining of the lesion may adhere to either the dura or the orbital periosteum, and its stripping increases the risk of dural injury and orbital injury [10]. Endoscopic management with marsupialization is preferable near these vital structures and allows for complete drainage, although excision of the mucocele wall can be performed safely when it is not abutting the dura or the orbit. Care must be taken to prevent scarring in order to avoid recurrence. Use of intraoperative image-guided navigation systems may help in identifying and safely opening mucoceles. The recurrence rate is ~1% with marsupialization [11].