A 31-year-old man was referred to the University of Iowa from an outside emergency department after suffering blunt trauma to his right eye. He was not wearing any eye protection when a nail was fired from a nail gun, bounced off a piece of wood, and then hit his right eye. He immediately developed eye pain but noted that he had good vision. He then developed floaters one hour later and a black cloud on the temporal side of his vision in his right eye. He continued to have some pain, especially when he moved his right eye nasally.

No past medical history 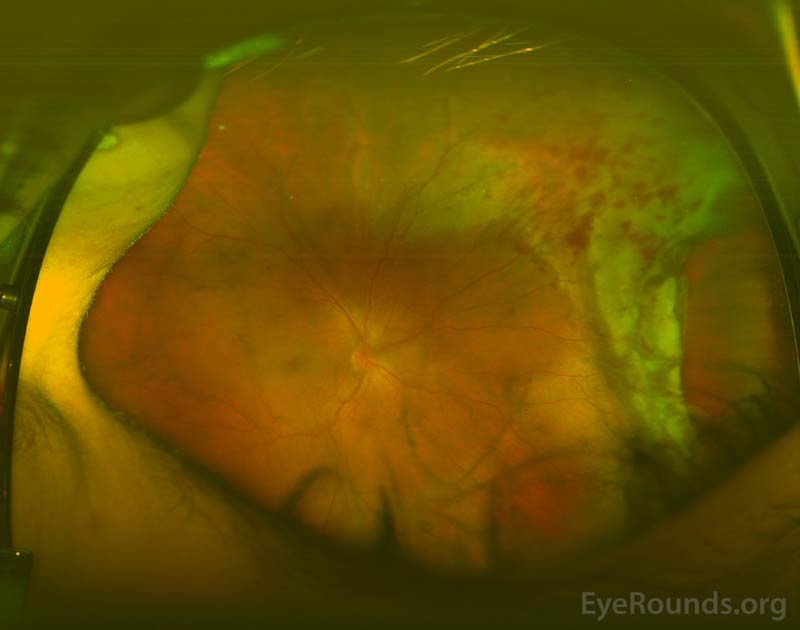 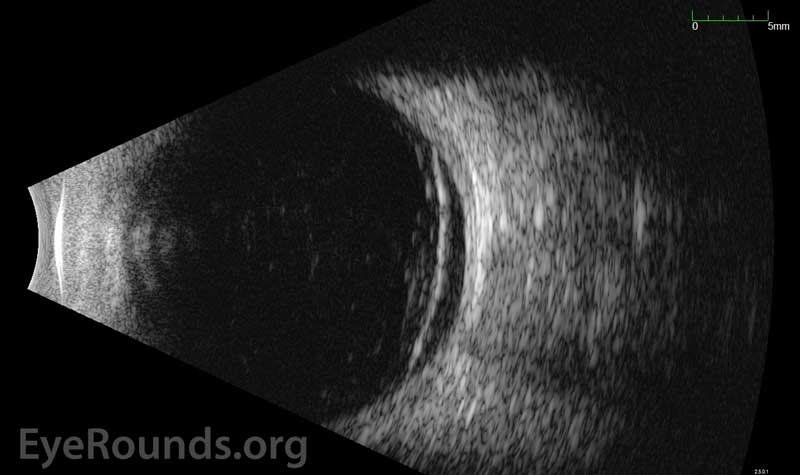 Figure 2.  Standardized Echography, OD. Transverse view with nasal quadrant centered at 3 o'clock (T3) showed mild to moderate hyper-echoic signals in the vitreous cavity, which was consistent with vitreous hemorrhage. Anterior to the equator, between 01:00 and 4:30, there was enhancement of vitreous with shallow elevation of the retina extending posterior to the equator. No other areas of retinal detachment were detected. See the ocular ultrasound tutorial for further explanation.

The patient was diagnosed with a traumatic superonasal retinal dialysis with associated rhegmatogenous retinal detachment of the right eye. A CT scan from the outside hospital was also reviewed, which showed no intraocular foreign body and no orbital fractures. After full discussion of the condition with the patient, he was consented for a scleral buckle procedure in the right eye.

Three days later, he underwent the scleral buckle procedure, which involved application of cryopexy to encircle the entire area encompassing the retinal dialysis and placement of a number 42 encircling band. The tension of the scleral buckle was adjusted to achieve a mild to moderate buckle height in all quadrants and to ensure that the retinal break was well-supported on the buckle. At post-operative day 1, the retina was flat posterior to the scleral buckle, but the far edge of the tear was just elevated off of the scleral buckle nasally. The decision was made to observe this area of elevation and to have the patient return in three days. At his follow-up appointment, the decision was made to perform laser retinopexy around the edge of the tear where it was elevated off of the buckle. At post-operative week 3, his vision was 20/300, which improved to 20/70 with pinhole, likely still limited by resolving vitreous hemorrhage. The retina was flat and attached in all areas.

A retinal dialysis is a specific type of retinal tear oriented circumferentially and located either anterior to the ora serrata within the ciliary epithelium or posterior to the ora serrata within the retina [1]. Retinal dialysis has been described as the most common retinal sequelae from an ocular contusion injury [2-4]. Therefore, the diagnosis of a retinal dialysis is commonly associated with a history of ocular trauma, with the most common form being blunt injury with a fist [2]. The incidence of rhegmatogenous retinal detachment caused by dialysis is 8-15% [1-3]. In a series of 5,360 eyes with retinal detachments, a dialysis was the most frequent type of tear in detachments related to trauma [1].

Hagler, et al. identified causes of dialyses other than trauma, such as contraction of vitreous membranes from previous wounds, chorioretinitis, or proliferative vascular disorders [1]. A subset of retinal dialyses have also been described as genetic, developmental, or idiopathic [3]. However, in a larger series of 191 patients, a thorough genetic evaluation of nine families provided little to no evidence for this etiology [1].

In a retinal dialysis, the retina is circumferentially separated from the pars plana at the ora serrata [6]. Unlike giant retinal breaks caused by vitreous traction, the vitreous base is often attached to the retina posterior to the edge of the tear, but there can also be avulsion of the vitreous base, which is considered pathognomonic for an ocular contusion injury [4]. Blunt trauma causes this type of retinal break by rapidly compressing the eye along its anteroposterior axis and expanding it in is equatorial plane causing tension near the vitreous base [4]. Other pathophysiologic theories include progression of microcystoid degeneration or retinoschisis, progressive enlargement of intraretinal macrocysts producing mechanical dialysis, or congenital inherent weakness of the extreme retinal periphery [1].

Many patients are initially asymptomatic from a retinal dialysis and do not present with symptoms until the dialysis has evolved into a retinal detachment. A retrospective review by Zion, et al. showed that only 15.8% of cases of retinal dialyses manifested within one month of injury, while 41% were diagnosed more than one year after the injury [3]. Also, Hagler, et al. reported that in patients with retinal detachment due to retinal dialysis, no symptoms were recorded in 61% of those with non-traumatic dialyses and in 58% with traumatic dialyses, whereas only 22% of patients with retinal detachment due to other cause had no symptoms [1]. It is postulated that the absence of symptoms is related to the fact that many retinal dialyses occur in the absence of a posterior vitreous detachment, there is slow progression of subretinal fluid, and there is characteristic involvement of the superior visual field [1]. If a patient develops symptoms, these may include flashes, floaters, blurred vision, loss of peripheral visual field, or loss of visual acuity [2 ,3 ,6]. In a study of 196 patients with retinal dialyses, the most common initial presenting symptom was decreased visual acuity secondary to macular detachment [3]. These data, as well as a study by Vote, et al., reinforce the importance of performing scleral depressed exams on patients with history of ocular trauma, in order to identify a retinal dialysis before it progresses to a detachment [7].

On exam, the vitreous is typically attached and a subtle dialysis may be seen as only a slit at the ora serrata that opens with scleral depression [6]. In other patients, however, the edge of the dialysis may be more elevated into the vitreous cavity and easily visualized [6]. Other associated signs of retinal dialysis secondary to trauma include angle recession, traumatic cataract, vitreous hemorrhage, avulsion of the vitreous base, retinal demarcation lines, intraretinal macrocysts, and pars plana detachment [2]. Hagler, et al. noted that the incidence of intraretinal macrocysts and demarcation lines was significantly more common in retinal detachments due to dialyses than detachments due to other causes, but also that the incidence increased with the duration of the detachment [1]. Another study showed that demarcation lines and retinal cysts were more common in inferotemporal dialyses suggesting some chronicity, whereas vitreous base avulsion, pars plana detachment, and angle recession were more common with superonasal dialyses suggesting more acute and severe trauma [2].

In eyes with vitreous hemorrhage or media opacities from trauma, standardized echography can be used to help identify a retinal tear or detachment (Figure 2). A study by DiBernardo, et al. showed that in a group of 42 patients with vitreous hemorrhage, echography correctly identified retinal tears in all but one patient that were found to have a tear on a follow-up clinical examination [8]. Another imaging modality that can be helpful in assessing peripheral retinal pathology is ultra-wide field imaging (Figure 1). These pseudocolor photographs can show up to 200 degrees of the retina and have been reported in the literature as very useful in documenting peripheral features of the retina [9].

An retinal dialysis with no or minimal subretinal fluid can be treated with photocoagulation or cryopexy [6]. A retinal detachment in the setting of a retinal dialysis should be treated within the same time period as other rhegmatogenous retinal detachments. In an ophthalmic procedure assessment report by the American Academy of Ophthalmology on the repair of rhegmatogenous retinal detachments, a macula-on retinal detachment should be repaired within 24 hours if the detachment is close to the macula or caused by a giant retinal tear (90 degrees or greater) and within a few days to 1 week if the detachment is in the periphery and does not show risk factors for rapid progression such as large superior tears or bullous fluid [10]. Several studies show that a single scleral buckling surgery is successful in approximately 87-95% of cases of retinal detachment associated with dialysis [2 ,11 ,12]. In one study by Jan, et al., reattachment was not attained with scleral buckling surgery in 4% of cases, but these cases either had grade C proliferative vitreoretinopathy or a dialysis involving more than six clock hours [11]. Scleral buckling is an ideal procedure for these detachments, because it helps to avoid difficult posterior vitreous detachment induction in young adults and secondary procedures, such as cataract surgery, in young patients who still have accommodation [11 ,12]. This procedure also avoids the need for positioning and reduces the risk for iatrogenic retinal breaks and complications related to gas/silicone oil [12]. As an alternative to scleral buckling, Melgen, et al. proposes that pneumatic retinopexy may be a less invasive alternative for dialyses associated with detachment in the superior eight clock hours of the retina [13].