A 38-year-old male was referred to the University of Iowa oculoplastics service for evaluation of a right orbital mass.  One year prior, he noticed progressive proptosis of the right eye (OD), gradual blurring of vision OD, and some occasional ache OD.  He denied double vision, redness of the eye, or eyelid swelling.  He had experienced repeated head/orbital/eye trauma during "street boxing" several years prior. He denied any previous eye or orbital surgery.

Negative except per HPI 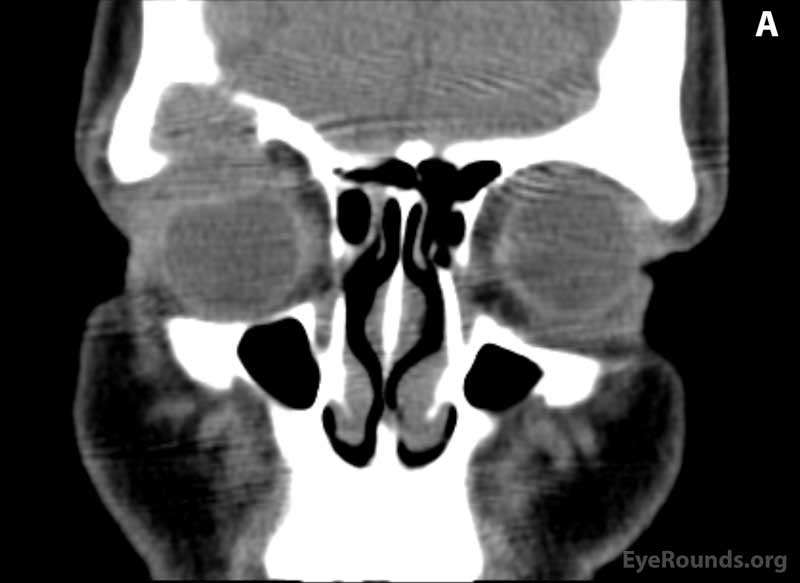 Figure 2: CT of orbits without contrast. (A) Coronal section; (B) Axial sections (superior to inferior 1-6): A circumscribed, encapsulated, soft tissue attenuation mass lesion in the superolateral right orbit can be seen eroding into the orbital roof and lateral right frontal bone. The mass appears to be compressing the superolateral globe and displacing the globe and superior and lateral recti anteriorly. 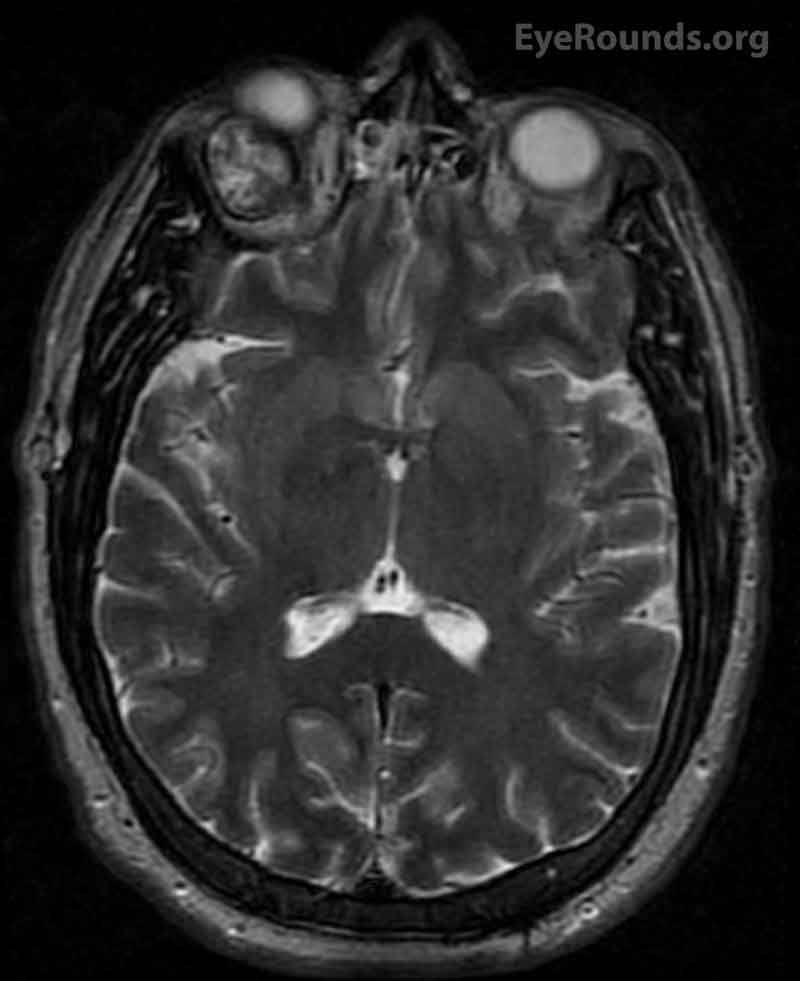 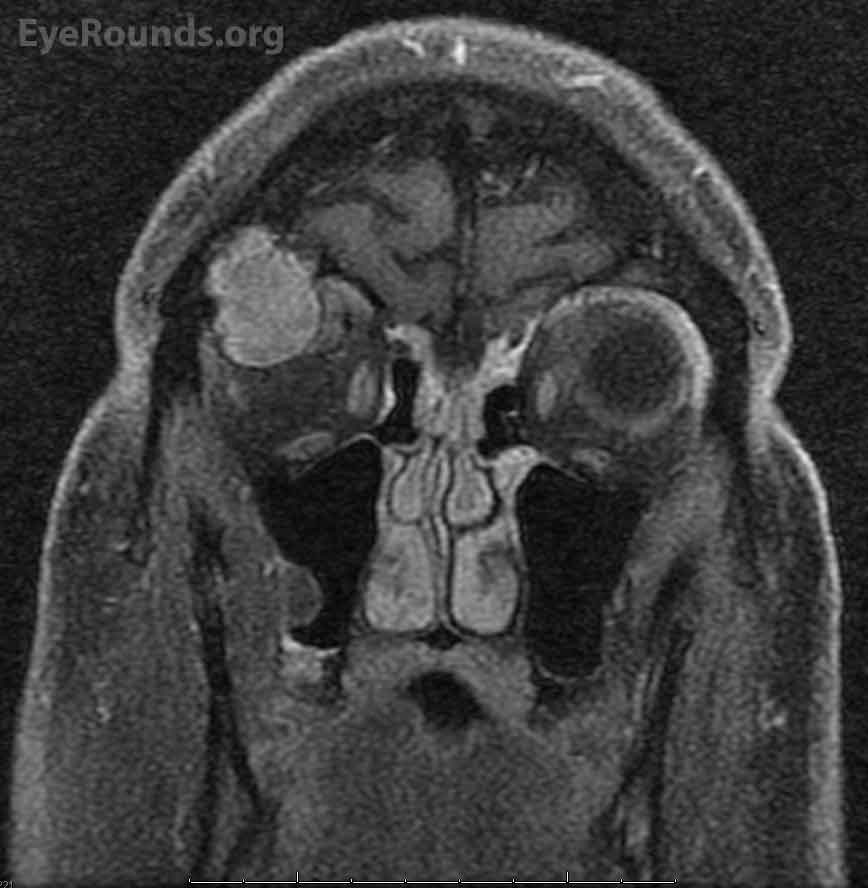 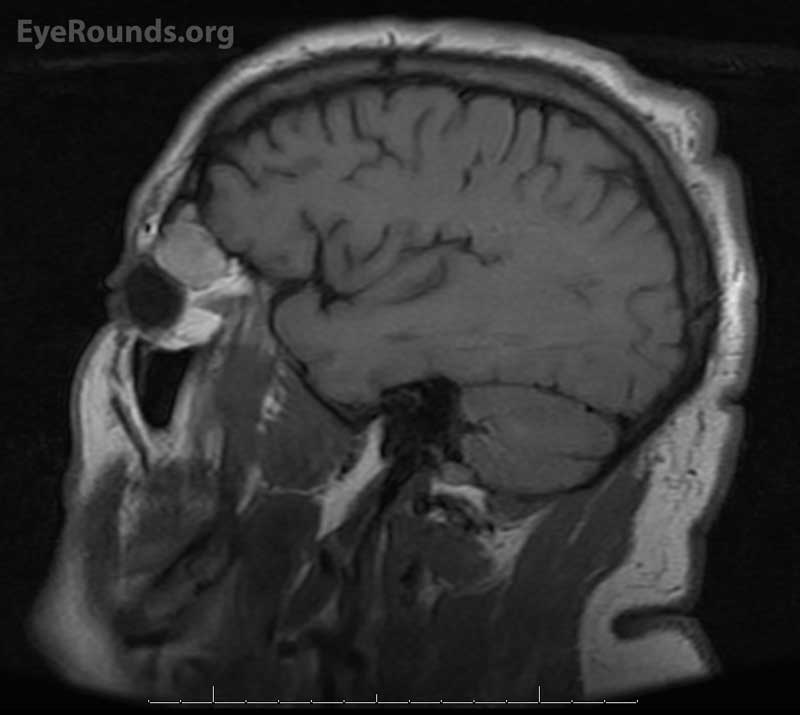 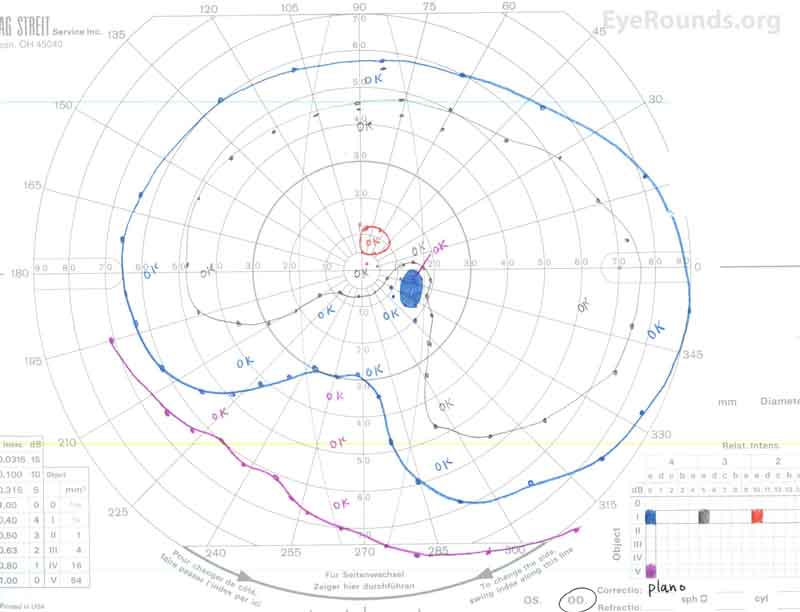 In a combined, multidisciplinary surgery, the neurosurgery and oculoplastics services removed the mass. After a supraorbital craniotomy and orbital osteotomy were performed, the mass was debulked and resected using Rhoton® dissectors and a micropituitary instrument with endoscopic guidance. Surgical pathology was obtained and demonstrated findings consistent with cholesterol granuloma, including numerous cholesterol crystal clefts with surrounding multinucleated giant cells, epithelioid histiocytes, and foamy macrophages (Figure 5). 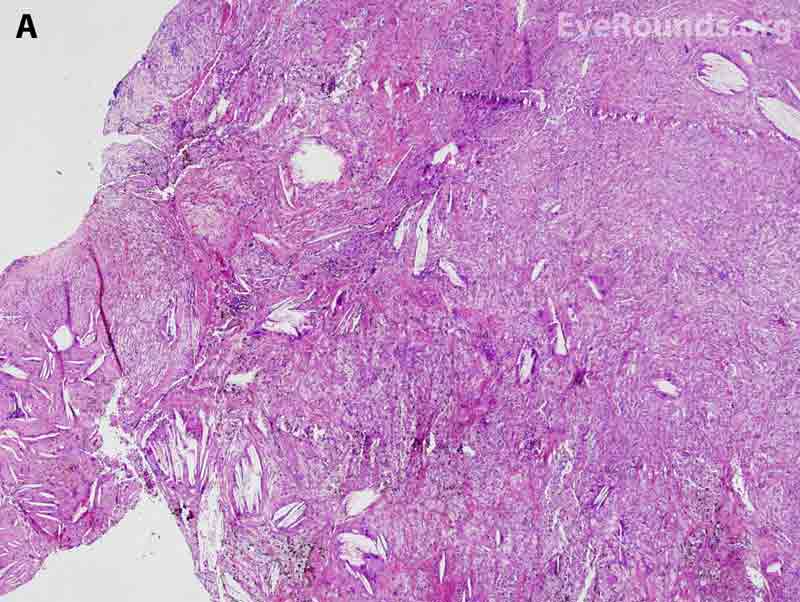 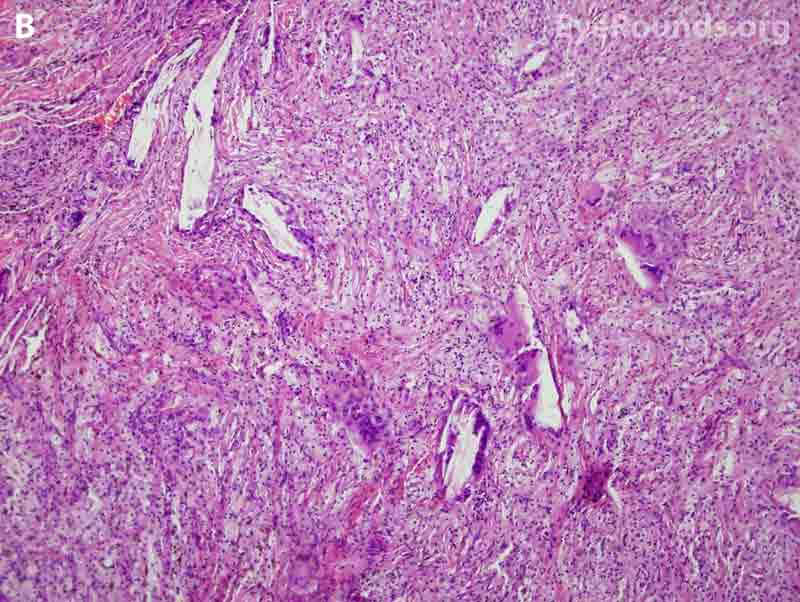 One month after the operation, the patient was seen in clinic, and best corrected visual acuity was 20/20 OD. There was no limitation in motility or diplopia in any field of gaze (Figure 6). The hypoglobus and proptosis were improved with exophthalmometry (Hertel) measuring 18 mm in right eye (23 mm prior) and 17 mm in left eye at a base of 94 mm.

Figure 6: Postoperative photos demonstrating no limitation in motility and resolution of the right hypoglobus.

Cholesterol granulomas involving the orbit are a rare entity as they typically occur in the petrous apex of the temporal bone.  Denig described the first case of cholesterol granuloma involving the orbit in 1902, and since then less than 200 cases have been reported. [1-3] They typically present early in the 5th decade of life, but the age of presentation can range from the 2nd to 9th decade of life.[2-4] There is a large male predominance, which was reported to be 90% in one systematic review.[3]

The exact etiology of cholesterol granulomas is unknown. However, the inciting factor results in the deposition of cholesterol crystals and a subsequent granulomatous inflammatory response. It is postulated that cholesterol crystals result from incompletely reabsorbed blood products following a hemorrhagic process.[5] It has traditionally been thought that trauma may be an inciting event for formation of cholesterol granulomas, though most patients (68%) do not recall a history of trauma.[3] Another proposed inciting factor is an anomaly within the frontal bone diploe resulting in secondary hemorrhage. [2-5]

Histopathology is important in confirming the diagnosis of a cholesterol granuloma. Cholesterol clefts, granulomatous inflammation (i.e. giant cells), and hemosiderin- and lipid-laden histiocytes are characteristically present. If present, fluid may consist of hematologic elements and inflammatory cells, including giant cells and histiocytes. There may be variable amount of fibrosis forming septations and a capsule. Of note, cholesterol granulomas lack epithelial elements, which differentiates it from epidermoid or dermoid cysts. [2-6]

As in our case, patients may complain of proptosis, which is the most commonly reported symptom (62%) associated with orbital cholesterol granulomas.[3] Other symptoms include periorbital swelling, double vision, blurring of vision, and eye pain or brow ache. On examination, proptosis and downward displacement of the globe may be quantified with measurements. A decrease in visual acuity, diplopia, binocular vertical diplopia, and restriction of motility may also be present on examination.[2,3]

Orbital cholesterol granulomas are typically well-circumscribed, osteolytic masses that are almost always localized to the frontal bone in the area adjacent to the lacrimal gland. In a systematic review, orbital cholesterol granulomas were found to be located in the superotemporal orbit in 97% of cases when location was specified.[3] Due to their osteolytic nature, it is not uncommon to see bony erosion and expansion into the orbit.[2] Radiographic findings include a radiolucent defect in the superotemporal orbit in the setting of osteolysis. CT findings include a homogenous, extraconal, soft tissue mass which is isodense (or may be hypodense) with the brain which does not enhance with contrast. MRI findings include high T1- and T2-weighted signal intensities, due to the hemoglobin breakdown products, and there is lack of enhancement with gadolinium. The mass may appear homogenous or heterogenous when septae are present.[6]

Most cases are identified when patients become symptomatic and present for medical attention. Definitive management of cholesterol granulomas include removal of the granulomatous mass by orbitotomy with a brow incision or a craniotomy with a scalp flap approach.[2-4,6]  Drainage and curettage of the lesion and all residual material adherent to bone is necessary. Recurrence may occur if the lesion is not completely removed or if cholesterol crystals reaccumulate in the area of the lesion. The recurrence rate has been reported to be approximately 7%.[3] As in our case, endoscopy can be used to aid in the visualization and complete removal of the lesion.[7]