Vascular Tufts of the Pupillary Margin

A 68-year-old female presented to the retina clinic with a history of recurrent hyphema in both eyes (OU).  She had multiple instances of spontaneous, non-traumatic hyphema for which she had eventually sought medical attention.  She was seen by an outside ophthalmologist who had confirmed a hyphema was present and noticed vascular tufts on the pupillary margin.  She was sent to our clinic to rule out any ischemic cause of the vascular tufts. She feels that heat and hot flashes contribute to her spontaneous hyphema events. Resting seems to allow for quicker resolution once a hyphema occurs.

Negative except for what is detailed in the history of present illness. 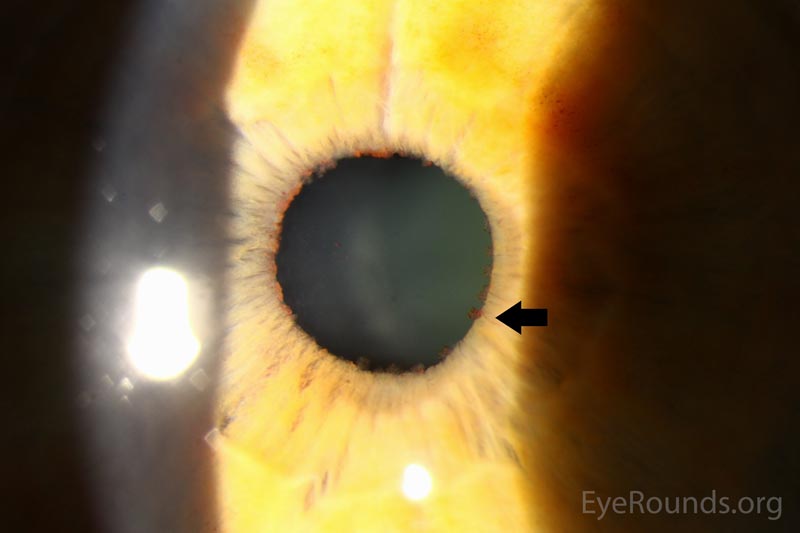 Vascular tufts of the pupillary margin versus neovascularization of the iris from ischemia such as ocular ischemic syndrome, vein occlusion, or diabetes.  Neovascularization or blood in the angle of the eye are also included in the differential, including carotid-cavernous sinus fistulas, orbital varix, or Sturge-Weber syndrome.

The glaucoma service was consulted. They had no further recommendations, as there was currently no evidence of optic nerve damage. They did note that there were no abnormal vessels in the angle. Argon laser therapy to ablate the vascular lesions was discussed and will be considered if the patient develops further hyphemas.

Vascular tufts of the pupillary margin

Spontaneous recurrent non-traumatic hyphemas can occur secondary to vascular tufts of the pupillary margin. The origin of these microhemangiomas is presumed to originate in the capillary network, which marks the end of the radial vessels and surrounds the sphincter of the iris [1]. Most patients with vascular tufts of the pupillary margin have no systemic disease, but they are also found in patients with diabetes mellitus and myotonic dystrophy [2].

One case report described a woman who underwent Argon laser therapy to the lesions as she developed raised intraocular pressure from a hyphema. In this case report, the patient had no re-bleeding one year after laser therapy and fluorescein angiography showed reduced fluorescence [4]. Another case report described a 60-year-old woman who was treated with Argon laser following a hyphema. She subsequently developed fresh vascular anomalies three months later in different locations. Further treatment led to permanent obliteration [1]. Finally, a woman in her 70s presenting with a spontaneous left eye hyphema and was followed over two years. During this period of time, the vascular tufts enlarged with increasing hyperfluoresence confirmed on indocyanine green angiogram, but there was no hyphema recurrence or intraocular pressure elevation. Therefore, the patient was observed.  The authors cited that typically Argon laser treatment is reserved for cases complicated by a recurrent hyphema [5].

Despite the unique appearance, prior to the diagnosis of vascular tufts of the pupillary margin, evaluation must be carefully undertaken to determine if there is an underlying cause of neovascularization. Careful fundus examination with consideration of wide-field fluorescein angiography or optical coherence tomography angiography, if available, are useful to determine whether there is any evidence of retinal non-perfusion which would prompt a more thorough systemic vascular work-up. One should also exclude conditions that may cause elevated episcleral venous pressure such as carotid-cavernous sinus fistulas, orbital varix, or Sturge-Weber syndrome, which can present with blood in the angle, visible by gonioscopy.