A 5-year-old female was referred to the University of Iowa Hospitals and Clinics (UIHC) Glaucoma Clinic for evaluation of suspected aphakic glaucoma of the left eye (OS). The patient was born with a congenital cataract OS, which was removed at 7 months of age by an outside provider. She was diagnosed with amblyopia OS and underwent patching of the right eye (OD) for 3 hours per day for a short period of time. At 5 years of age, she was found to have an IOP of 32 mmHg OS and was started on timolol 0.25% twice daily OS. She was then referred for further evaluation.

No significant past medical history

No family history of congenital cataracts, glaucoma, or other eye diseases 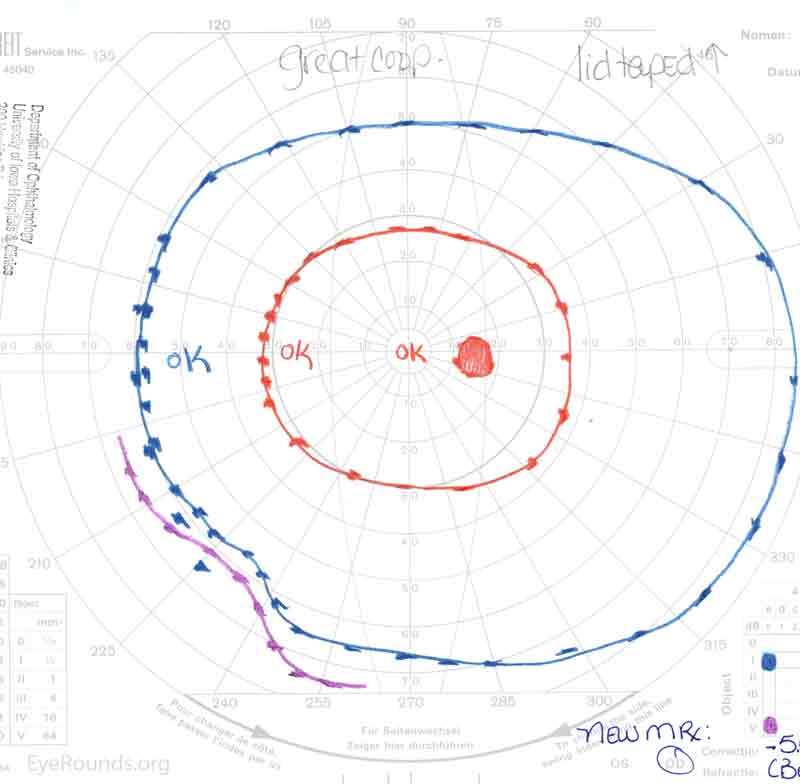 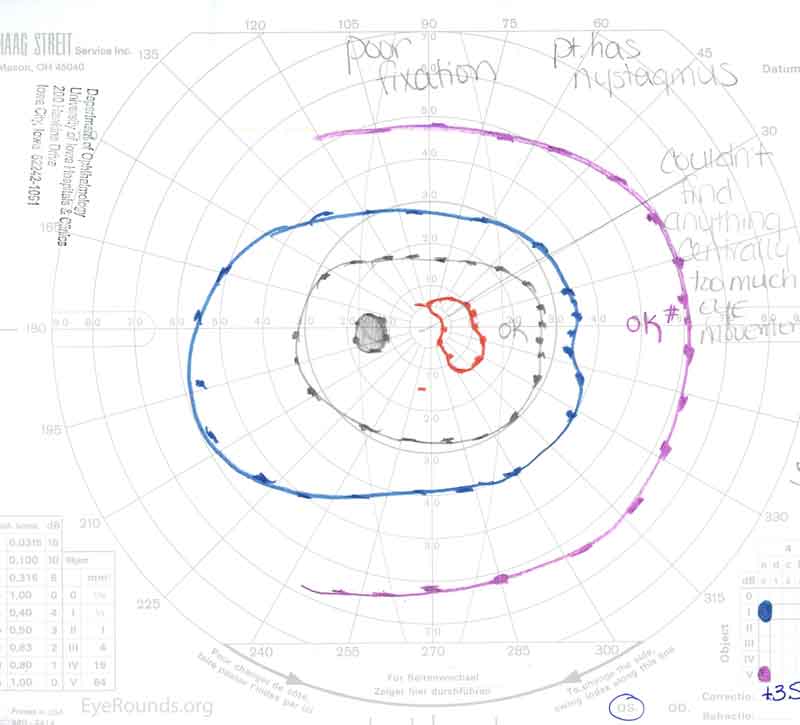 Figure 1. Goldmann visual field (A) OD showing a full field and (B) OS showing generalized constriction with only a small paracentral island of l2e remaining.

The patient was diagnosed with aphakic glaucoma OS. Because IOP was 23 mmHg, she was switched from timolol 0.25% to timolol-dorzolamide twice daily OS. At 2 months follow-up, IOP was 27 mmHg. Therefore, latanoprost 0.005% at night was added. She continued to have persistently elevated IOP over the next 2 years, resulting in progressive optic nerve cupping and deterioration of her visual field with a superior arcuate scotoma encroaching on fixation. At this point, it was decided that she would need a surgical procedure. A trabeculectomy was considered, but because she wore contact lenses, the decision was made to precede with a pars plana vitrectomy with insertion of a Baerveldt drainage device. The surgery was performed without complication. IOP decreased to 14 mmHg on timolol-dorzolamide and latanoprost.

Two years after her surgery, she presented with 3 days of pain OS with an IOP of 50 mmHg. She was scheduled for emergent surgical evaluation of her Baerveldt implant. Intra-operative assessment showed drastic anterior migration of the tube, past the posterior capsule and into the iris tissue. During surgery, the tube was freed from the iris, and IOP decreased. The tube was then pulled through the existing peripheral iridectomy and placed on the anterior surface of the iris (Figure 2). The patient did well postoperatively, and her IOP remained in the mid-teens on timolol-dorzolamide and latanoprost.

The patient was followed closely and was later noted to have high myopia and buphthalmos OS (Figure 3). She was referred to oculoplastics for proptosis, eyelid retraction, and a large left exotropia (Figure 3). At age 22, she underwent an elective procedure for cosmesis of her proptosis, which involved a medial and lateral orbital wall decompression. At age 23, she underwent large left medial rectus resection for exotropia, taking care to avoid area of the Baerveldt implant superotemporally. Both surgeries were performed without complications (Figure 4). 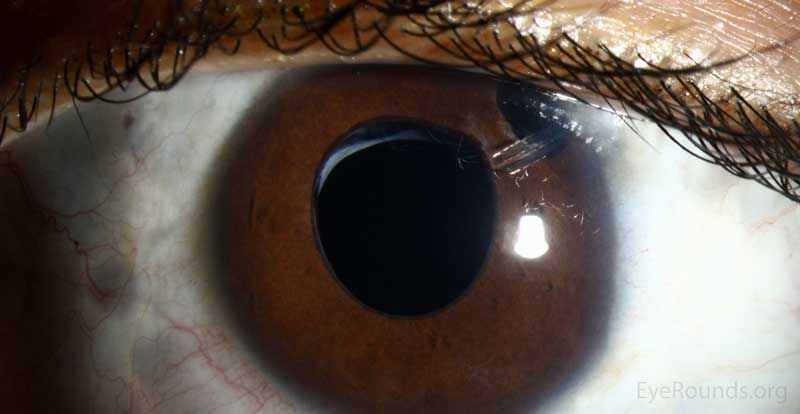 At her most recent appointment, 17 years after her initial presentation, her IOP was 17 mmHg OS on timolol only. Unfortunately, her vision had decreased from 20/100 to 20/1250 OS over her 17-year course. Remarkably, her optic nerves (Figure 5A and B) and OCT of the optic nerves were unchanged over the last 7 years.  Her visual field did show some slow progression over time OS (Figure 6). 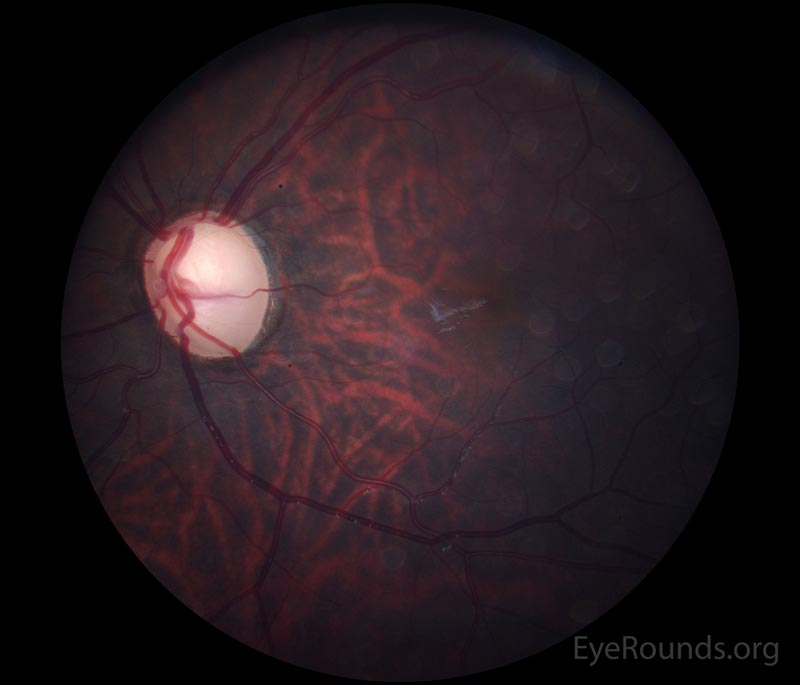 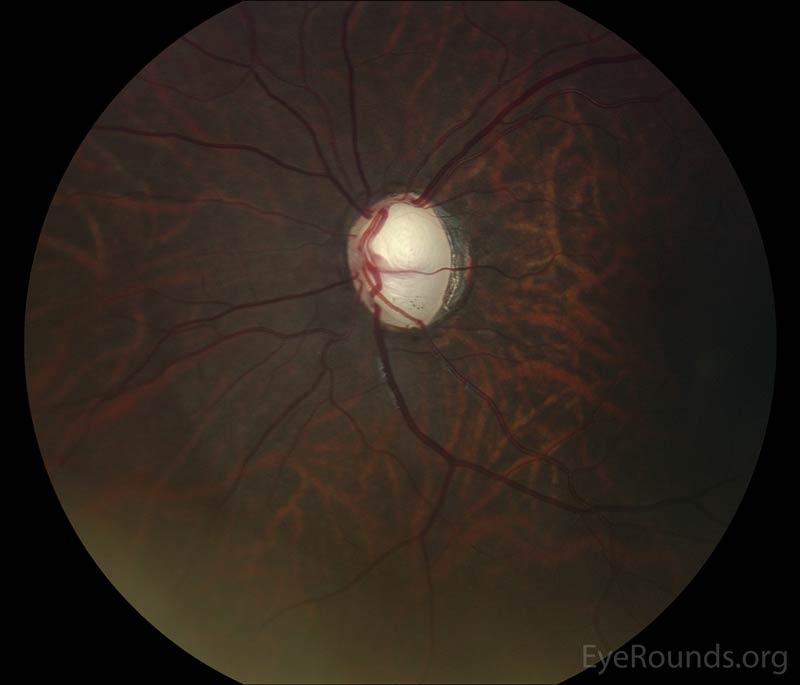 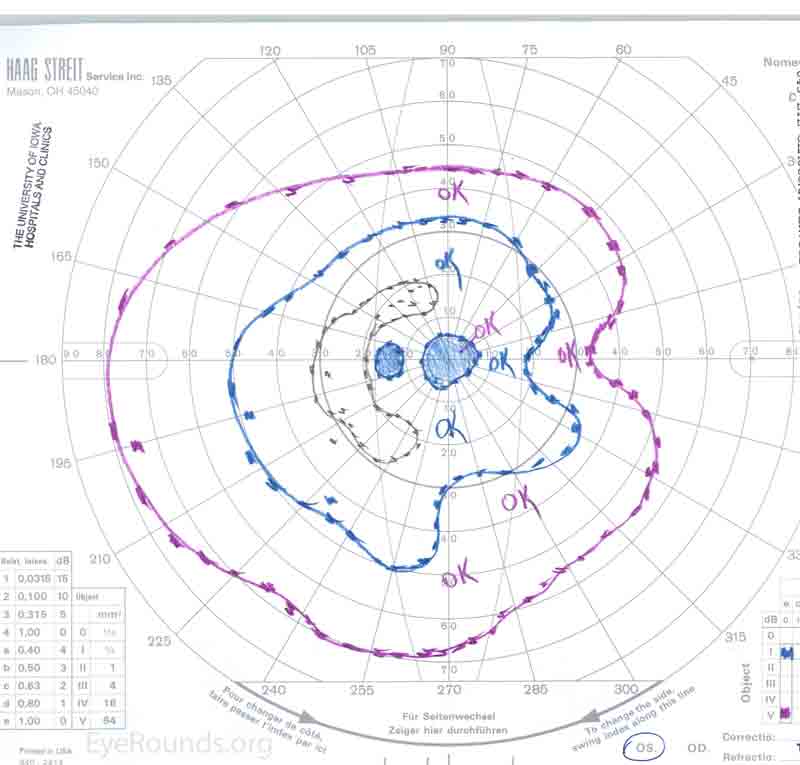 Aphakic glaucoma is classified as a secondary form of open angle glaucoma and ranks second as the most common cause of glaucoma in the pediatric population [1]. The following factors have been implicated in its development: surgery within the first year of life, corneal diameter less than 10 mm, retained lens proteins, the presence of other ocular abnormalities, certain cataract types (e.g. complete, nuclear, or persistent hyperplastic vitreous), and a history of secondary surgeries [2]. The most consistent risk factor across the literature has been cataract surgery at a young age [3]. In one study of 137 patients with prior congenital cataract surgery, 12% of patients developed aphakic glaucoma within a mean of 9.6 years following surgery. A meta-analysis using individual patient data on 470 children who underwent cataract surgery in infancy revealed 17% developed glaucoma within a median 4.3 years. The risk was highest in patients who underwent surgery at less than 4 weeks of age or infants with microphthalmos [1]. In an article by Kirwan in 2006, the incidence of aphakic glaucoma following congenital cataract surgery ranged from 15% to 45% [4].

A genetic etiology has also been considered as an explanation for the condition. There are a number of genes that contribute to both the development of cataracts and glaucoma, such as the PAX6 gene [5].

As stated above, early cataract surgery has been described as the most commonly identified risk factor for aphakic glaucoma. Early lensectomy is thought to interfere with maturation of the trabecular meshwork. In particular, normal meshwork development requires structural interactions between the native lens, zonules, ciliary body, and trabecular meshwork [6]. Other studies have postulated that aphakic glaucoma may develop from chronic trabeculitis secondary to postoperative inflammation or blockade of the trabecular meshwork with retained lens material [7]. Additionally, lens proteins that remain after extraction may degenerate into byproducts that are toxic to the trabecular meshwork [6]. In a retrospective review in 2004, 15% of patients were found to have retained lens material postoperatively; the same study cited literature that reported 41.6% to 78% of patients had residual cortex or lens material [6]. Aphakic glaucoma is typically an open-angle glaucoma, adding weight to the proposition that an interaction occurs between trabecular meshwork cells and lens epithelial cells and/or the vitreous leading to the development of elevated intraocular pressure [8].

There has been some discussion that corticosteroids could contribute to aphakic glaucoma. However, this mechanism has received less support as post-operative steroids are typically used for 1 to 2 months following surgery whereas aphakic glaucoma often develops years later [6].

Typically, patients develop aphakic glaucoma between 4 to 6 years after cataract surgery and present with elevated IOP, corneal clouding, and excessive loss of hyperopia [8]. Patients often have thick corneas and small anterior segments [9]. Children may present with vague symptoms ranging from irritability to photophobia [8]. However, most commonly, aphakic glaucoma is asymptomatic. Therefore, careful monitoring and surveillance of patients at risk is crucial [4], as IOP elevation may go unrecognized and untreated until fundoscopic exam reveals optic nerve cupping [1].

IOP measurement in children is commonly performed under general anesthesia. However, general anesthetics can lower IOP, resulting in unreliable readings, and IOP alone is insufficient to make the diagnosis of aphakic glaucoma. A full examination should be performed including cycloplegic refraction, measurement of corneal thickness, gonioscopy, slit lamp exam of the anterior segment, optic nerve head evaluation, visual fields and ocular coherence tomography of the optic nerve if the patient is able. Although aphakic glaucoma is typically an open angle glaucoma, acquired angle defects may be visible on gonioscopy. A retrospective study conducted in 1995 looked at pediatric glaucoma patients who had a history of lensectomy and developed glaucoma two or more years after surgery. Gonioscopy prior to the operation revealed no consistent angle defects, but post-operatively, 96% of patients with glaucoma had an angle defect characterized by blockage of the trabecular meshwork, often caused by pigment or crystalline deposits [6, 10]. Screening for aphakic glaucoma after congenital cataract surgery should occur every 3 months for the first year postoperatively and twice yearly for the next 10 years, after which, annual exams can be resumed [2].

Treatment of aphakic glaucoma is similar to the treatment of any other secondary open-angle glaucoma. Both medical and surgical treatments play a role, with topical medications serving as the first approach [8].

If patients continue to have consistently elevated IOPs on maximum medical management, surgical management, such as placement of a glaucoma drainage device, becomes necessary. Placement of a drainage device can be difficult in these patients given their thick corneas and small anterior segments. Therefore, a pars plana vitrectomy may be required to facilitate placement of the tube behind the iris [9]. This type of surgery is not without risks, and complications can occur including malpositioning or migration of the tube, endophthalmitis, and corneal decompensation [8]. Trabeculectomy is another option, but these patients often require use of aphakic contact lenses, which may be difficult in the context of a bleb [9]. Many children go on to require subsequent interventions [8].