"My vision is blurry and distorted." 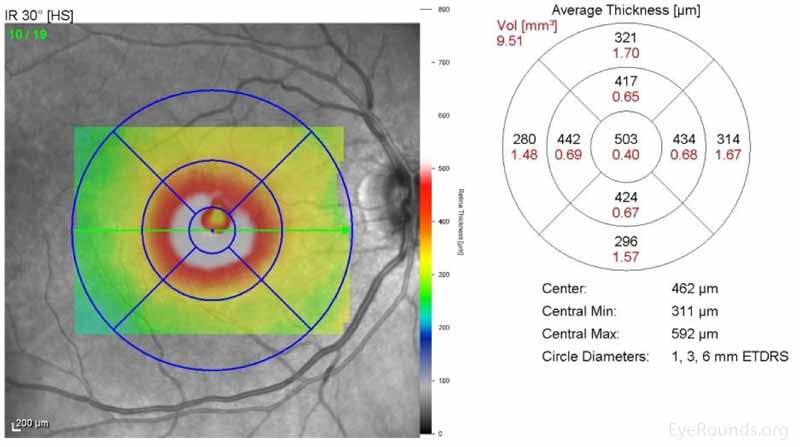 Figure 1:  Spectralis ocular coherence tomography (OCT) of the macula OD on initial presentation demonstrating the presence of a full-thickness macular hole with interstitial and subretinal fluid.

Figure 2:  Spectralis OCT of the macula OD at the one-month post-operative visit demonstrating interval closure of the macular hole.

FTMHs are a relatively uncommon problem of the retina with a reported prevalence of 0.2 per 1000 persons in the Blue Mountains Study and to up to 3.3 per 1000 persons in the Baltimore Eye Study.(1) Incidence is 8 per 100,000 persons per year.(2) There is bilateral involvement in 5-20% of cases, but FTMHs rarely present simultaneously.(1-3) FTMHs occur most in the 6th and 7th decades of life and have a female:male incidence of 2:1.(2, 3) It is unknown why females are more likely to have a FTMH in this age-related, idiopathic disease.

FTMHs were first described in 1869 by Knapp.(1) Initially, the pathophysiology was believed to be degenerative, and hence the early name by Kuhnt was "retinitis atrophicans sive rarificans centralis."(4) The understanding of the pathophysiology has expanded as examination techniques improved and with the advent of OCT.(1) FTMHs are currently divided into primary and secondary macular holes based on etiology.(1)

Vitreomacular traction plays a major role in the formation of primary FTMHs.(1, 4, 5) Gass, in his descriptions of the stages of macular holes, hypothesized that the shrinking of prefoveal vitreous cortex leads to anterior traction on the retina.(5) As the vitreous continues to detach, tangential traction from the prefoveal vitreous forms the hole within the fovea.(5) OCT has helped further our understanding of the vitreoretinal interface, showing that the process of PVD tends to begins perifoveally, leading to persistent adherence at the fovea.(4) This detachment of the vitreous can begin early in life.(1)

The following points further illustrate the role of the vitreous detachment in the pathophysiology of FTMH. In patients with a FTMH, if the fellow eye has already undergone PVD, there is a very low risk of FTMH in the fellow eye.(4, 5) In a study by Niwa, the fellow eyes of 201 patients with FTMHs were observed for two years. Of the fellow eyes of 201 patients, 58 still had vitreofoveal attachments. Of those 58 patients with vitreofoveal attachments, three patients developed a FTMH in the fellow eye, 24 had PVD over the fovea without macular hole, and 31 eyes did not have any changes in the vitreofoveal relationship over the two years.(6) Notably, macular holes developed only in those patients with changes in the vitreofoveal relationship.(6) In a series by Johnson, 96% of 26 eyes with Stage 1 or 2 idiopathic macular holes had a shallow, localized perifoveal vitreous detachment.(7) The vitreous often separates from the fovea last because of firm adherence to the areas of thinnest internal limiting membrane (ILM), including the 500 microns of the fovea. It is hypothesized that vitreous motion due to eye movement may exert localized forces on the fovea at the points of adherence.(7)

While the role of the vitreous is important in the pathophysiology of primary macular holes, retinal degeneration may also play a role. For example, some patients have developed macular holes after extended periods following vitrectomy, where vitreous has been previously removed.(8) Retinal thinning and degeneration may cause small holes to develop, which may close spontaneously via glial proliferation, and this hypothesis would explain the predominance of glial cells and Muller cells in the operculum.(8) Vitreous that is present may prevent closure due to the traction and chemical inhibition of cell migration.(8) It is likely that both degenerative and vitreous traction mechanisms are contributing to the pathophysiology.

In contrast to primary macular holes, FTMH can also be secondary, for example after trauma and sudden axial compression.(1) This leads to retinal rupture of the fovea in addition to other traumatic injuries including sclopetaria, peripheral retinal breaks, and commotio retinae. One major distinguishing feature of secondary macular holes is that the vitreous may not be detached and is a far less common etiology of macular holes than primary macular holes.(1)

Patients with macular holes may present with painless decreased central vision with a central scotoma and/or metamorphopsia.(3) In some cases, patients may not notice vision loss unless the other eye is occluded, especially for Stage 1 macular holes.(3) Visual acuity is not only decreased due to the central retinal tissue defect but also worsened by the surrounding retinal detachment and cystic changes that can be present.(3)

The clinical signs of macular holes depend on the stages as first defined by Gass.(5) Clinically, these stages were revised by Gass in 1995 and represented in Figure 1.(9) In Stage 1 macular holes, there is cystic foveal change that appears clinically as a yellow spot (Stage 1a) or a yellow foveal ring (Stage 1b).  Stage 2 is a full-thickness retinal defect that has a pseudo-operculum and appears as an eccentric oval or crescent shaped defect on a yellow ring. Stage 2 often has an irreversible progression to Stage 3, which is a >400 micron full-thickness retinal defect with a persistent hyaloid attachment, often with a small ring of subretinal fluid. The presence of a Weiss ring suggesting the presence of a complete PVD qualifies as a Stage 4, and yellow deposits are often visible in the defect. The Watzke-Allen test is a useful clinical test for confirming a FTMH. In the Watzke-Allen test, a thin slit beam is projected over the suspected hole, and patients are asked to report if they see a break in the light beam, which confirms a full-thickness retinal defect. 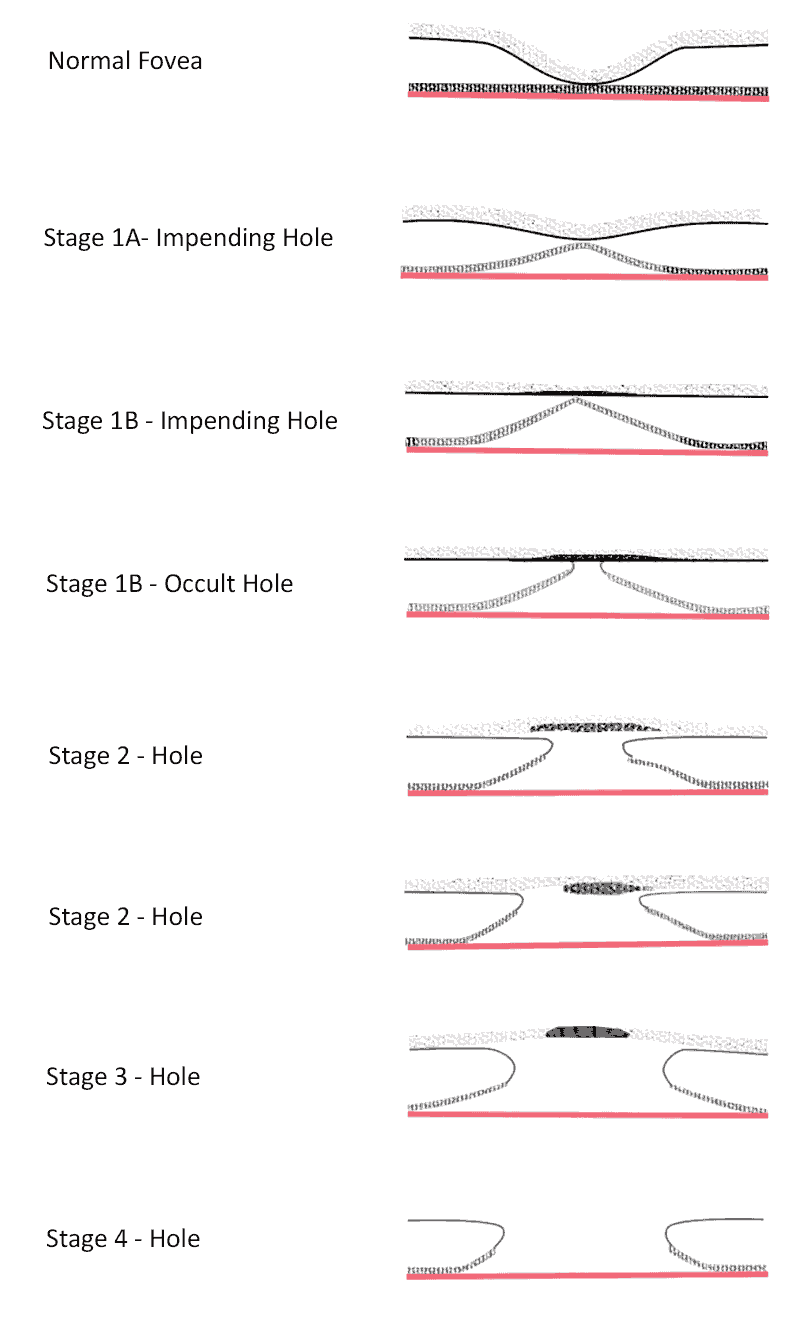 Figure 3: This figure demonstrates the stages of macular holes based on the 1995 paper by J. Donald M. Gass.(9) This figure shows the range of pathology between cystic changes (Stage 1) to full thickness defects with a complete posterior vitreous detachment (Stage 4)

Optical coherence tomography (OCT) is very useful in diagnosing a FTMH and distinguishing it from other similar-appearing diagnoses. Lamellar macular holes have missing inner retinal tissue, but the RPE and photoreceptor layers are intact on OCT and often have a tri- or bilobulated appearance on fundus exam/photos.(1) Lamellar macular holes often lack the thickening, subretinal fluid, or cystic changes common to FTMHs.(3) Pseudoholes are due to centripetal contraction of an ERM resulting in the appearance of a hole on clinical examination, but pseudoholes do not have loss of retinal tissue on OCT.(1, 3) OCT can also help distinguish FTMHs from other similar-appearing conditions such as solar retinopathy, central serous chorioretinopathy, macular druse, pattern dystrophy, and pseudo-operculum.(3, 4) Macular holes can be sized on OCT and are classified as small <250 microns, medium 250-400 microns, or large >400 microns.(2) These are sized based on using the narrowest point in the mid retina in a plane parallel to the retina.(1)

Treatment of FTMHs was initially proposed by Kelly and Wendel in 1991, and in their early series of 52 patients, pars plana vitrectomy with vitreous cortex detachment and fluid-gas exchange was successful in closing 58% of macular holes.(10) In those who had closure, 73% had improvement in visual acuity by two lines or better.(10) The proposed mechanism in which this procedure closes holes is the release of vitreomacular traction, then gas to dehydrate the hole edges, occlude fluid, and allow glial cells to proliferate and close the hole.(1) With modern surgical techniques, the successful anatomical closure rates approach 100%.(1) Complications of the surgery include iatrogenic retinal tears (10%), ocular hypertension, endophthalmitis, cataract (50% at two-year follow up) and visual field loss.(1-3) The addition of ILM peeling has the additional complications of ganglion cell layer loss and dissociation of the nerve fiber layer.(1)
The treatment and prognosis is often dependent on the stage.  Stage 1 holes will spontaneously resolve in about 50% of eyes.(2) If they do progress, it is usually early and the Vitrectomy for Prevention of Macular Hole Study Group reported that 40% of eyes with Stage 1 holes progressed over 4.1 months.(4) Once the hole is Stage 2 or more, the spontaneous closure rate is low (2-4%), and surgery is indicated to close the hole and restore vision.(3) The size of the hole is important, as holes <250 microns have a 98% surgical closure rate, while holes >400 microns have a lower closure rate at about 90%.(1) By 2-4 weeks after surgery, the successful closure is apparent on OCT with reapproximation of the retinal tissue.(3) Final vision after treatment is quite good, with 2/3 of patients 20/50 or better.(3)

Despite the relatively high success rate of repair, many controversies in macular hole surgery remain. This includes the utility of adjuvant therapies including TGF-b, autologous serum, whole blood, and autologous concentrated platelets to aid in the closure of chronic or large holes. Another controversy is the benefit of ILM removal for improved closure rates versus posterior hyaloid removal and/or ERM removal alone.(1) In one study of FTMHs >400 microns, the closure rate was 73.3% without peel and 100% with ILM peel.(1) In FTMHs <400 microns, the closure rates were 100% for both groups (with and without ILM peel), arguing against the need for ILM peel in small FTMHs.(1)

Post-operative face down positioning has been recommended since the invention of the surgery, but its necessity is becoming less clear. Often, face down positioning for one week is recommended to provide maximum gas tamponade.(2) More recent studies have found comparable success rates with no face-down positioning after surgery, or assuming a less-strict "reading" position.(3) This is especially true if enough gas is present to isolate the hole from the vitreous over the 3-7 days required for closure.(1) Additionally, the role of gas tamponade itself is unclear. Vitreous release without gas has successfully closed some holes.(8) The release of vitreomacular traction may be the most important factor in allowing the hole to close and reparative gliosis to occur.(8)

Pharmacologic therapy has been developed, and intravitreal ocriplasmin is FDA-approved for the treatment of macular holes. There remains controversy about the utility of ocriplasmin, and success rates are best in the treatment of small holes with persistent vitreomacular traction.(1) In phase 3 clinical trials, small holes <250 microns had a closure rate of 58.3%.(2)