An 88-year-old hyperopic female presented with left eye pain rated 10/10 and associated blurred vision, headache, nausea, and vomiting. The pain started approximately 4 hours previously and progressively became worse. She denied other ocular symptoms including tearing and photophobia. The patient had a history of cataract extraction with intraocular lens placement and Nd:YAG (neodymium: yttrium aluminium garnet) capsulotomy bilaterally. She also had a history of having a laser procedure previously for an unknown diagnosis. 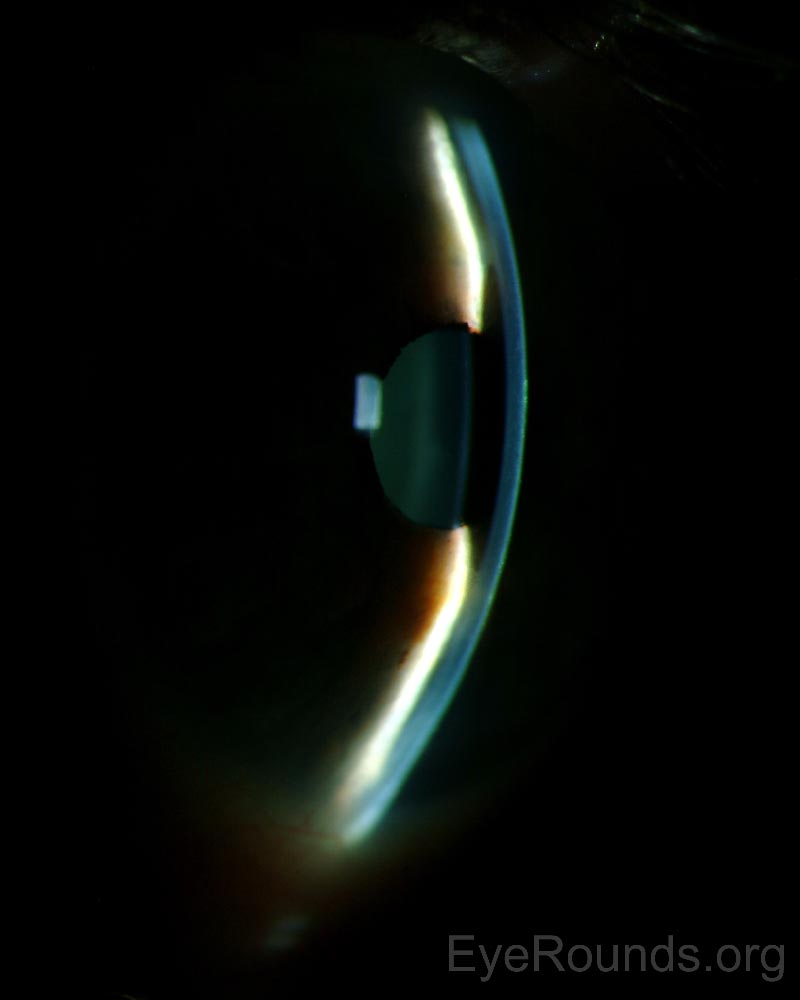 Figure 1: Slitlamp photo OS (Photographer Brice Critser): Using the slit beam to assess anterior chamber depth, there is iridocorneal touch peripherally with approximately two corneal thicknesses deep centrally. The iris does not have the bombé configuration and the anterior chamber is diffusely shallow. 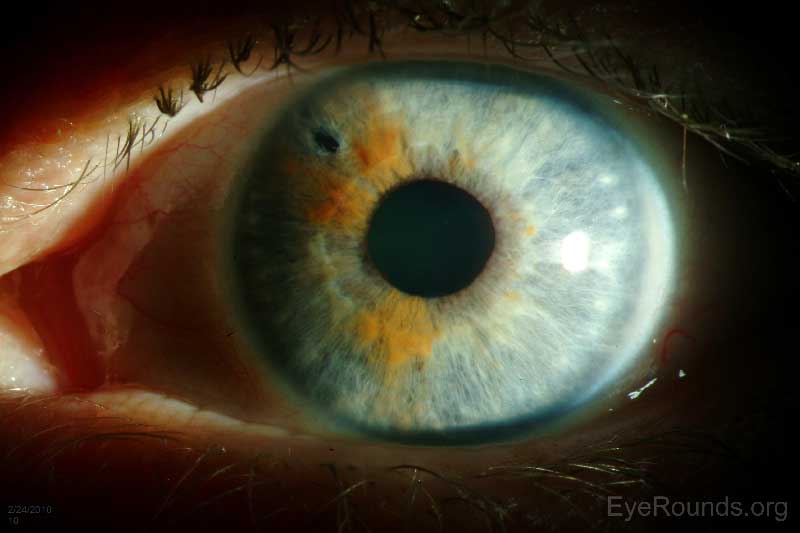 Figure 2: Slitlamp photo OS (Photographer Brice Critser): Using a light aimed from the temporal limbus across the iris plane, a shadow is cast on the nasal aspect of the iris. This is created from the shallowing of the anterior chamber and anterior shift of the iris blocking the passage of light.

Multiple rounds of topical dorzolamide/timolol, brimonidine, and latanoprost were given to this patient in the emergency room. Additionally, she received dilating drops and intravenous acetazolamide. Her intraocular pressure declined to the low 30's and the anterior chamber started to deepen in the emergency room. She was seen in the eye clinic the following morning. At that time, the anterior chamber had again shallowed and the IOP returned to mid 40's OS by applanation. The patient received four additional rounds of topical dorzolamide/timolol, brimonidine, latanoprost, and atropine, in addition to immediate release acetazolamide. The IOP was unresponsive, and a pars plana vitrectomy with Ahmed Seton was performed. The day after the procedure, the patient had resolution of headache and eye pain OS. The intraocular pressure was found to be 5. Unfortunately, the intraocular lens had dislocated posteriorly in the postoperative setting, likely secondary to pseudoexfoliation, but vision with +10D lens and pinhole was in 20/40 range. She elected to defer additional surgery at this time.

Aqueous misdirection is a form of secondary glaucoma, related to pressure buildup from trapping of aqueous within the vitreous. It typically presents with diffuse shallowing (both central and peripheral) of the anterior chamber in the setting of elevated intraocular pressure, and is considered a diagnosis of exclusion (1, 2).

Aqueous misdirection typically occurs after correctional surgery for angle closure glaucoma. These patients usually have a history of angle closure or peripheral anterior synechiae (3). Aqueous misdirection has infrequently been associated with trauma, inflammation, or an unknown cause (4-6). It may occur days to months postoperatively; one study found median time to diagnosis was 33 days (7).

Aqueous misdirection occurs when aqueous is directed posteriorly and becomes trapped within the vitreous (8). This causes compression of the anterior vitreous making it more impermeable to aqueous (6, 9). This impermeability decreases the ability of the aqueous to flow freely forward through the posterior chamber to the anterior chamber, which leads to further trapping of aqueous in the posterior segment (8). The mechanism by which aqueous initially becomes directed posteriorly and trapped is unknown, though many theories have been proposed (9).

The key features that distinguish aqueous misdirection from similar diagnoses are diffuse shallowing of the anterior chamber (thus absent iris bombe), anterior displacement of the lens-iris diaphragm and a posterior segment free of hemorrhage, masses, or vein occlusion (6). A patent iridotomy/iridectomy in the setting of a flat or shallow anterior chamber is another clue to this diagnosis (4).

Distinguishing aqueous misdirection from other clinical entities can be difficult. Pupillary block presents with a deep central anterior chamber with a shallow periphery, and does not appear in the presence of a patent iridotomy (4, 6). Pupillary block may be either primary (the most common mechanism of primary angle closure glaucoma) or secondary. Major secondary etiologies include ectopia lentis, cataractous lens intumescence, aphakia/pseudophakia with dislocated intraocular lens, pupillary capture by intraocular lens implant, or posterior synechiae. Pupillary block is uncommon after surgery for angle closure glaucoma.

Anterior rotation of the ciliary body due to swelling, inflammation, medications, or masses can also cause a shallow anterior chamber. Additional testing, such as echography and anterior segment imaging, can be used to look for masses or effusions causing the anterior movement of the ciliary body.

Finally, hypotony may be deceptive because it can present with a shallow anterior chamber and the lens may be opposed to the cornea causing artificial elevation of intraocular pressure (6, 10). This entity should be distinguishable from the others simply by palpation of the eye, revealing a hypotonous globe.

B-scan ultrasonography is useful to rule out other causes of flat anterior chamber such as choroidal effusions, suprachoroidal hemorrhage, and masses (1). High-resolution ultrasound biomicroscopy may assist in diagnosis by demonstrating anterior displacement of the lens-iris diaphragm, and possibly even anterior rotation of the ciliary body, ciliary processes, and/or zonules (5).

The first line treatment is medical therapy consisting of cycloplegics and aqueous suppressants (1, 3). Cycloplegia is the most important treatment as it moves the iris-lens diaphragm posteriorly in addition to relieving iris-lens apposition with dilation. A typical regimen includes atropine 1% four times a day (8). Aqueous suppressants include beta blockers, alpha 2 agonists, and oral and topical carbonic anhydrase inhibitors. Osmotic agents can be used to shrink the vitreous (3, 8). Cholinergics should be avoided as these medications tend to shift the lens-iris diaphragm forward. It is possible for up to 50% of cases to be relieved using such a regimen for 5 days, after which the medications may be tapered. However, recurrence is common, and a more definitive treatment may be necessary (8). Other potential treatment options include Nd:YAG laser therapy for aphakic and pseudophakic patients to disrupt the anterior vitreous face.

A pars plana vitrectomy is considered the definitive treatment (1, 3, 11). Removal of the anterior hyaloid is the most critical part of this surgery in order to prevent recurrence (8). Pars plana lensectomy should be added if damage to the crystalline lens occurs or if it is not possible to deepen the anterior chamber by vitrectomy and anterior hyaloidectomy alone (1, 8). Prophylactic pars plana vitrectomy may be considered during intraocular surgery for the fellow eye of a patient with a prior history of aqueous misdirection (12).