One week prior to presentation, a 5 year-old female complained of an intermittent frontal headache. Over the next 2 days, she began having daily episodes of emesis and her parents noticed "bulging of her left eye."  She was taken to her local emergency room where an MRI was performed and demonstrated a left orbital lesion extending into the superior orbital fissure. She was transferred to the University of Iowa for further evaluation and management. Her parents reported no recent upper respiratory infection or other illness.

Past Medical History: None 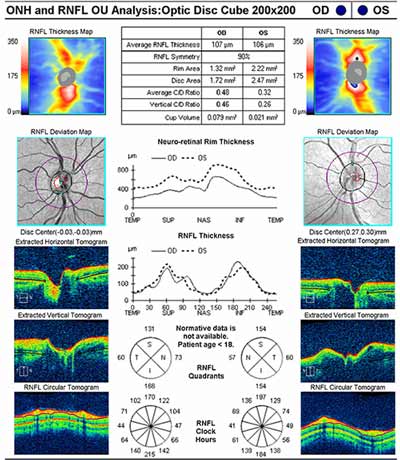 A diagnosis of lymphatic malformation was made based on the clinical and radiographic findings. After initial evaluation by the oculoplastics team, the patient was referred to neuro-ophthalmology for her anisocoria. No evidence of a third nerve palsy or tonic pupil was found. The anisocoria was thought to be physiologic in nature. However, due to the persistent headaches, nausea, and vomiting, the patient was also seen by pediatric neurology. A lumbar puncture was performed which was normal. Observation was recommended as there was no evidence of visual compromise. The headaches were thought to be either primary in nature or secondary to the lymphatic malformation. The patient was seen back one month later for follow up and was found to have stable vision, no increase in proptosis, and there was resolution of her anisocoria.

At the 6 month follow-up exam there was no evidence of visual compromise and the proptosis had decreased to 1 mm difference between the eyes (Figure 6). However, she continued to complain of headaches despite the use of acetominophen. The oculoplastics team recommended a follow up evaluation with neurology and a cardiology consult to consider sildenafil. The neurology service recommended that she discontinue acetaminophen and her headaches resolved without further intervention.

She was seen again 10 months after presentation with a stable exam and 1 mm of proptosis of the left eye. The headaches had subsided and the plan was made for continued observation.

Lymphatic malformations are relatively uncommon orbital lesions. Deep orbital malformations often go unrecognized until an intralesional hemorrhage or upper respiratory tract infection occurs, causing clinical symptoms. The superficial lesions (Figure 7) come to clinical attention much sooner and are generally more of a cosmetic concern. They are much less likely to cause any visual compromise compared to the deep or combined lesions. 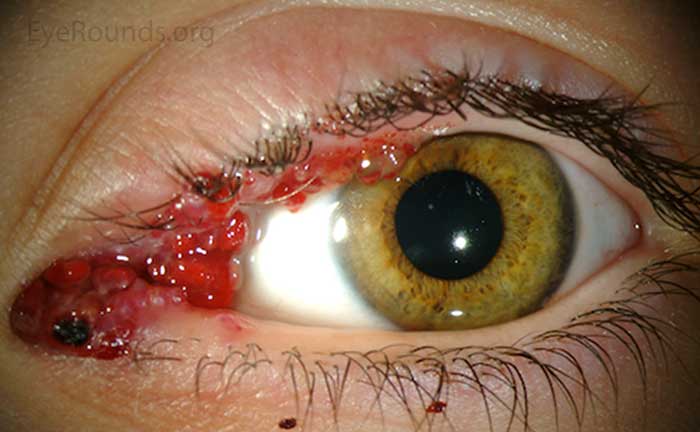 Common presenting signs and symptoms of deep orbital lesions include proptosis, decreased vision, decreased motility, pain, and ptosis.[1] In one study of 26 patients diagnosed with an orbital lymphatic malformation, 85% presented with proptosis, 73% with ptosis, and 46% with motility restriction.[5] While the lesion itself is benign, it can threaten vision and/or cause cosmetic deformity. Vision loss is typically secondary to amblyopia or compressive optic neuropathy.

Orbital imaging is essential in helping make the correct diagnosis and identifying the extent of the lesion. CT and MRI typically demonstrate a cluster of non-enhancing "grape-like" cystic lesions with internal septations.[6] MRI can often delineate fluid-fluid levels within the cyst that represent layering of blood products from a recent intralesional bleed. Blood will appear hyperintense on T1 imaging. These unencapsulated lesions often demonstrate an infiltrative growth pattern, intertwining extensively with other orbital structures.[6] Unlike a capillary hemangioma that is well encapsulated, lymphatic malformations frequently cross anatomic boundaries and tissue planes.[7] In keeping with the Orbital Society classification, true lymphatic malformations (no flow malformations) should demonstrate no enhancement with contrast studies due to their isolated vascular system. However, combined venous and lymphatic lesions will often demonstrate some degree of enhancement and evidence of feeder vessels due to their connection with the venous system.[4]

Ultrasound is another imaging modality that can aid in diagnosis. Although a skilled echographer is required, the patient is not exposed to radiation or intravascular contrast. Typical characteristics of a lymphatic malformation on ultrasound include an irregular shape with poorly outlined borders, areas of high reflectivity, no change with Valsalva maneuver, and no vascular connection.[8]

Historically, the treatment paradigm for lymphatic malformations was observation until surgical intervention was absolutely necessary. This was largely due to the high recurrence rate, difficulty of complete excision, and risk of injury to normal adjacent structures. However, recent advances could change the way we approach these lesions with a lower threshold for intervention. The management of lymphatic malformations now falls into 3 categories: 1) observation, 2) non-surgical intervention and 3) surgical excision.

Observation is an appropriate plan for asymptomatic patients in whom vision is not threatened. Given its infiltrative and amorphous structure, complete excision is often difficult and intraoperative complications can occur. Current indications for intervention include amblyopia, compressive optic neuropathy, exposure keratopathy, and severe cosmetic disfigurement.[3] However, because the clinical course is unpredictable some authors would pursue earlier intervention to minimize the risk of vision loss in the future.[1]

A wide range of non-surgical options have been used for orbital lymphatic malformations including sclerosing therapy, corticosteroids, sildenafil, laser therapy, and pre-operative embolization.[3, 4, 10-12] Numerous sclerosing agents have been used for sclerotherapy including bleomycin, doxycycline, Ethibloc, sodium tetradecyl sulfate, ethanol, and OK-432. Past studies have shown variable results with these single agents and various complications.[1, 13-16]

Recently Hill et al described a technique of percutaneous drainage and ablation of the cystic component of lymphatic malformations with good results in 13 patients. In their study macrocysts (>1cm) were treated with dual-drug chemoablation consisting of sodium tetradecyl sulfate and ethanol, and microcysts (<1cm) were treated with doxycycline alone. In addition, the macrocysts were drained and the catheter was left in place for 3 days to help prevent inflammatory edema and re-endothelialization of the cyst.[1] Their results were promising but the technique requires the use of interventional radiology, often multiple treatments, and a team of physicians with extensive experience with vascular lesions.

Small case series have also been reported on corticosteroids and sildenafil as potential options in treating lymphatic malformations.[11, 12] Gandhi et al recently published their success with sildenafil in two young boys with aggressive lesions who did not respond to drainage and sclerosing procedures.[12] However, large case series and randomized trials are lacking for both treatments.

Surgical excision has been a mainstay of treatment for patients with visual compromise or severe cosmetic deformity from lymphatic malformations. Surgical intervention is often combined with non-surgical interventions to help aid the surgeon in lesion removal. The surgical approach varies depending on the location and extent of the lesion. However, given its amorphous, unencapsulated nature, complete excision is difficult, often unsuccessful, and carries with it high complication rates including intraoperative hemorrhage and damage to adjacent normal structures. Cautery and CO2 laser can help reduce bleeding but can damage surrounding structures. The use of intraoperative fibrin glue has been described as an aid to surgical excision. The fibrin glue is injected into the cystic components of lymphatic malformations in order to provide a more solid structure to aid in dissection and improve hemostasis. Other techniques involve the combination of fibrin glue and sclerosing agents to help debulk these lesions.[3, 17] Often debulking is the primary goal to help prevent vision loss or improve cosmesis.

The clinical course of lymphatic malformations proves to be unpredictable. Although most can be observed, when intervention is required management can be difficult.