A 56-year-old female presented to the University of Iowa Retina Service with a one-year history of increasingly distorted vision in the left eye (OS) described as “crinkled”. She had been previously diagnosed with an epiretinal membrane (ERM) in both eyes (OU) and a lamellar macular hole OS which was observed. Best corrected vision was noted on prior examination to be 20/25 in the right eye (OD) and 20/30 OS. In addition, the patient had a known history of type 1 myotonic dystrophy with mild ptosis OU, progressive lower extremity weakness, shortness of breath and fatigue.

No alcohol or tobacco use

OU: Round and briskly reactive without afferent pupillary defect 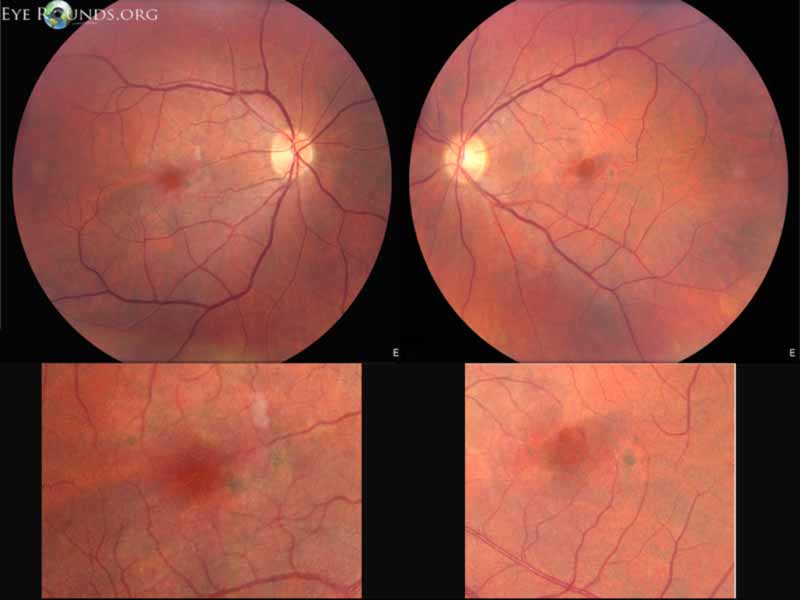 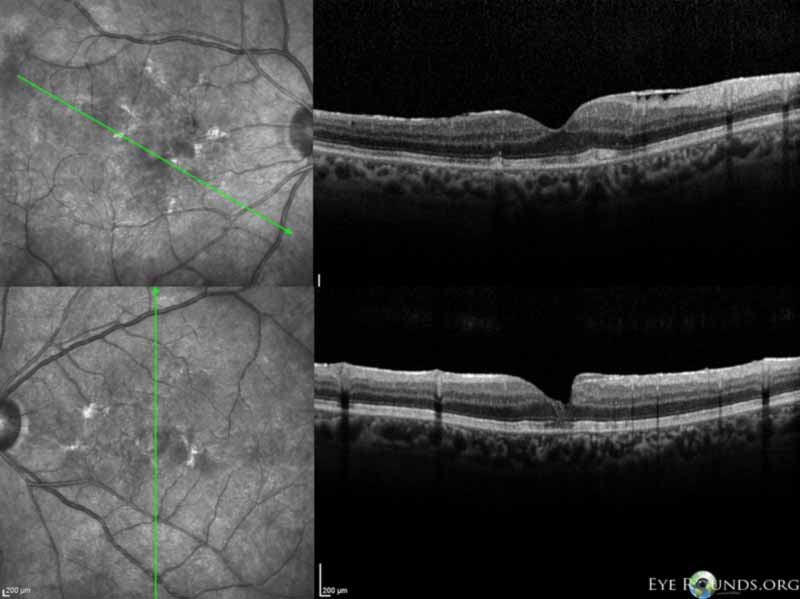 Figure 2. Optical Coherence Tomography (OCT) images demonstrate an ERM along with hyper-reflective material in the outer retinal layers causing dome-shaped elevations OD. These elevations appear to correspond with pigment clumping seen on fundoscopy. In the left eye there is a faint remnant of an ERM, a lamellar macula hole and mild disruption of the photoreceptor layers in the macular center. 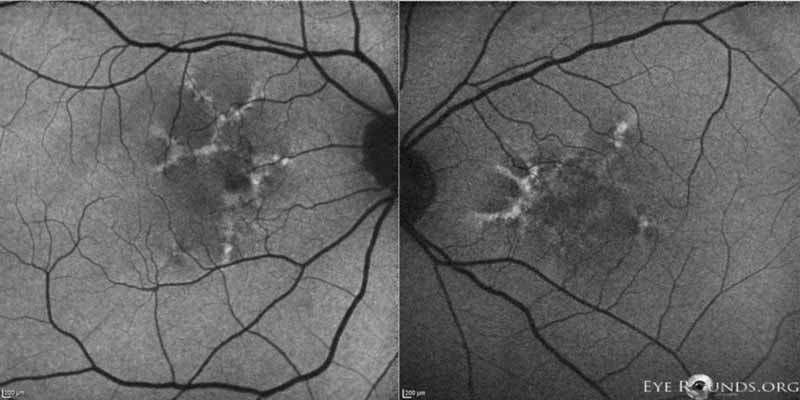 Figure 3. Fundus autofluorescence (FAF) images reveal a hyperfluorescent material, lipofuscin, which is found throughout the macula OU in a butterfly-shaped pattern. Hypofluorescent areas corresponded to pigment clumping seen on fundoscopy.

The patient is a 56-year-old female with type 1 myotonic dystrophy with known ERM OU and lamellar hole OS who presented with “crinkled” images in her vision OS over the prior year. While her initial symptoms were felt to be mainly due to ERM OU and lamellar hole OS, her further decrease in vision OS was thought to be the result of macular changes associated with pattern dystrophy.

Pattern dystrophy (PD) refers to a group of dominantly inherited macular diseases that are characterized by the accumulation of pigment by retinal pigment epithelium (RPE) cells [1,2]. Although currently classified according to the pattern of lipofuscin and pigment deposition seen on funduscopic examination, it is best to view PDs as a single disease with variable penetrance and expressivity. Evidence for lumping the various patterns into a single disease includes families in which members with identical gene mutations express different patterns in the macula, as well as patients that show different patterns in each eye. Furthermore, PDs have been shown to progress into different subtypes of PD [3-6]. The gene implicated to cause pattern dystrophy is the retinal degeneration slow (RDS)/peripherin gene which is located on chromosome 6p21.2. Specific missense mutations include Gly167Asp[7], Arg172Trp[8,9], Cys213Arg[10], Cys213Tyr[11], and Cys250Phe[12], as well as the nonsense mutations found in Gln239ter[13] and Tyr285ter[13]. The RDS gene encodes for a photoreceptor outer-segment disc maintenance glycoprotein that when disrupted, is thought to interfere with the photoreceptor membrane’s integrity [11,14-16]. PD subtypes include butterfly-shaped pattern dystrophy, reticular dystrophy, multifocal PD, simulating flavimaculatus, adult vitelliform dystrophy, and fundus pulverlentus [17]. The patient described in this case displayed the butterfly-shaped pattern on FAF, consistent with butterfly-shaped pattern dystrophy (BPD).

BPD, a well-known subtype of macular pattern dystrophy, displays a unique pattern of hyperfluorescence as well as hypofluorescence on FAF imaging [20]. In a sense, FAF can be thought of as a non-invasive assessment of RPE health where areas of differing fluorescent properties reflect the changes and discrepancies in lipofuscin contained within the RPE. While not shown here, classically BPD will show early hyperfluorescence outlining hypofluroescent regions on fluorescein angiography (FA) [18]. On FAF, lipofuscin will be hyperfluorescent whereas atrophy or pigmentation will be hypoautofluorescent. With this in mind, age-related macular degeneration (AMD) can mimic the appearance of PD preceding the onset of geographic atrophy. Furthermore, the late appearance of PD can appear very similar to AMD as drusen progressively become less prominent. In such cases, distinguishing between AMD and PD should be made with FAF by way of monitoring changes in fluorescence.

The diagnosis of BPD usually occurs in midlife and patients are typically found to be asymptomatic at the time of diagnosis. Classically, patients with BPD suffer modest losses of vision later in life. However, some patients can develop geographic atrophy and depigmentation in their fifth and sixth decade of life, leading to significantly reduced visual acuity. Furthermore, BPD has been linked to an increased risk for development of choroidal neovascularization, which can also cause further vision loss [19].

Interestingly, PD has been associated with seemingly unrelated diseases, namely myotonic dystrophy [21]. Myotonic dystrophy is a highly variable, multisystem, slowly progressing disease that is classically characterized by the wasting of muscles. Type 1 myotonic dystrophy, also known as Steinert disease, is an autosomal dominant disease caused by a trinucleotide repeat of CTG sequences in the dystrophia myotonica protein kinase (DMPK) gene, located on chromosome 19. Immediately downstream of DMPK is SIX5, a gene thought to play a part in eye development. The CTG repeat sequences are located within the promoter of SIX5 and may presumptively be a component for the etiology of the ocular manifestations associated with myotonic dystrophy [22]. While the exact genetic etiology for the link between myotonic dystrophy and pattern dystrophy remains unclear, this patient’s case further demonstrates their association.