A 57-year-old female presented to the Ophthalmology clinic at UIHC complaining bilateral central photopsias for the past two years. She suffered from Sjogren syndrome and inflammatory arthritis and was currently treated with prednisone and methotrexate. She was previously treated with hydroxychloroquine (Plaquenil) 200mg bid (6.5mg/kg) for 10 years, which was stopped one year prior to presentation.

Social History: occasional alcohol but no tobacco or intravenous drug use.

Pupils: Reactive to light in each eye from 5 mm in the dark to 2 mm in the light. No relative afferent pupillary defect (RAPD).

The optic nerves appeared healthy with a 0.3 cup-to-disc ratio. There was mild paracentral depigmentation of the RPE in the macula that spared the central fovea OU. The vessels and peripheral exam were normal OU (Figure 1). There was no posterior vitreous detachment, retinal tears, or retinal detachments.

Figure 1: Fundus photos demonstrate mild paracentral depigmentation of the RPE that spare the central fovea in both the right (A) and left (B) eyes. Fluorescein angiography shows parafoveal hyperfluorescence OU (C and D).

Ocular manifestations of hydroxychloroquine include corneal verticillata and retinal toxicity. Verticillata are cornea deposits of salts within the corneal epithelium.  This condition does not cause symptoms and is reversible with cessation of the medication. The finding of corneal verticillata bares no correlation with retinal toxicity and is not an indication to stop the medication [1]. The hallmark of hydroxychloroquine toxicity is bilateral pigmentary retinopathy [1]. Patients with early retinal findings are often asymptomatic despite having subtle paracentral scotomas. Later in the disease, patients can develop a bilateral bull's eye maculopathy, characterized by a ring of retinal pigment epithelium (RPE) depigmentation in the macula, sparing the fovea, which is often accompanied by paracentral and central scotomas  [5]. End stage hydroxychloroquine toxicity leads to widespread RPE and retinal atrophy with a loss of central vision, peripheral vision, and night vision. Recent studies have shown that patients of Asian descent develop initial damage in a more peripheral extramacular distribution near the arcades, most frequently in the inferotemporal region with corresponding superonasal field defects. African-American and Hispanic patients display a predominately paravoveal pattern similar to the European subjects [6].

Fundus changes on biomicroscopy, including bull's eye maculopathy, are indicative of fairly advanced hydroxychloroquine-induced retinal toxicity which is largely irreversible despite cessation of the medication. Continued deterioration in visual function can occur after discontinuing hydroxychloroquine, possibly due to slow clearance from the retina and systemically [9, 12]. Screening is important in detecting early retinal toxicity before notable funduscopic changes in order to limit the amount of visual loss. Central vision can be preserved if damage is recognized before there are changes in the retinal pigment epithelium (RPE).

The mechanism of CQ and HCQ is poorly understood. The molecules bind to melanin the RPE causing metabolic changes and toxic effects. The deposits affect the outer retina, photoreceptor layer, and the RPE, but preserve the inner retina.

Although hydroxychloroquine retinal toxicity is thought to be rare, recent studies suggest it may have a higher prevalence than previously recognized. A large study examining patients with more than 5 years of HCQ use were evaluated with 10-2 visual fields or spectral-domain optical coherence tomography (SD OCT). The overall prevalence of toxicity in this group was 7.5% with a wide variation in daily dose and duration of use. Beyond this point the risk increases sharply to 20% after 20 years [7]. The risk is lower with a lower dose however there is no true safe dosage for longer duration of use.

Another study of 4000 patients found a prevalence of 6.8/1000 patients [8]. Risk factors that increase the chance of hydroxychloroquine retinopathy include daily dosage, cumulative dose, renal or liver disease, age, and previous retinal disease [9]. A daily dose of >6.5mg/kg (ideal body weight) places patients at higher risk, but a daily dose below this level did not preclude the patient from developing toxicity after many years of treatment. A cumulative dose of >1000g of hydroxychloroquine or 460g of chloroquine was likely the largest risk factor, which was typically achieved after 5-7 years of a typical dosage [8, 10]. However, there have been case reports of patients with hydroxychloroquine toxicity as early as 1.9 months after starting treatment [11].

The most critical risk for toxicity is excessive daily dose by weight [6]. Dosage >5.0mg/kg increases the risk of toxicity. Duration of use is also a critical risk factor. Previous recommendations in 2011 noted cumulative dose (daily dose x duration in years) was an indicator of risk, however the most accurate assessment is on the basis of duration of use relative to daily dose per real weight as seen in the figure below. Another change from the 2011 recommendations was that real weight was better than ideal weight for calculating dose and lower risk was achieved with doses 5 mg/kg real weight [6]. 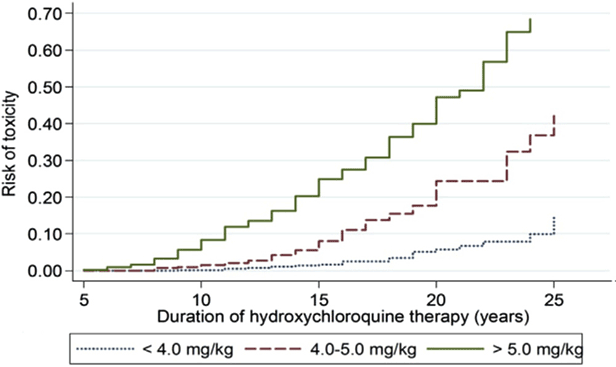 Figure 6:  This is a Kaplan Meier curve showing the cumulative risk of retinopathy over time, with different levels of hydroxychloroquine (HCQ) use. When use is between 4.0 and 5.0 mg/kg, the risk is very low within the first 5 to 10 years, but it increases markedly thereafter. Reproduced from Melles and Marmor, 2014 [7]

HCQ is cleared by the kidneys and thus renal disease increases the risk of toxicity. Therefore, both dosage and screening frequency may need to be adjusted. Tamoxifen use (used in breast cancer treatment) increases the risk of toxicity approximately 5 fold) [8]. The mechanism of this linkage is not understood. Patients with underlying retinal disease may be at a higher risk for toxicity, but no specific data has confirmed this. However, maculopathy does makes the implementation and interpretation of screening more difficult.

The American Academy of Ophthalmology (AAO) has recently provided revised recommendations for screening that incorporates new advances in technology allowing for earlier detection of the disease in 2016.

Baseline Examination: All patients should have a baseline ophthalmologic examination within the first year of initiating HCQ or CQ therapy with thorough risk factor assessment and fundus examination of the macula to rule out underlying disease. Baseline visual field and SD OCT are recommended if abnormalities are present (e.g. macular lesions, glaucoma, etc) that could affect screening tests.

Annual Screening: The risk of toxicity is rare in the first several years of treatment with HCQ and CQ. In the absence of major risk factors, screening can be postponed for 5 years. Toxicity develops slowly and a yearly exam after year 5 is sufficient.  Earlier screening is recommended for patients with any of the previously mentioned risk factors. Annual screening examinations include biomicroscopy, automated 10-2 visual field and spectral domain optical coherence tomography (SD-OCT) with optional fundus autofluorescence (FAF) and/or multifocal electroretinogram (mfERG) as needed.

SD-OCT: Unlike time domain optical coherence tomography, SD-OCT has the resolution to detect localized thinning of the retina in the parafoveal region. On SD-OCT, loss or thinning of the parafoveal and perifoveal photoreceptor layer and focal disruption of outer segment laminations are consistent with toxicity [13]. These changes on SD-OCT can be seen before funduscopic abnormalities are present. Wider angle scans or scans across the vascular arcades are important for Asian eyes [6].

Multifocal Electroretinogram (mf-ERG): This test allows the detection of localized parafoveal or extramacular depression in early retinopathy [10, 15]. This has similar sensitivity to visual fields and can provide objective confirmation of suspected paracentral field loss.

In summary, hydroxychloroquine-induced retinal toxicity is likely more prevalent than previously believed. Once thought to be safe at a daily dose of <6.5mg/kg/day [16], newer studies show that many years of hydroxychloroquine treatment at a "safe dose" can still lead to toxicity [6]. Newer guidelines state that daily dose >5mg/kg of real weight/day can lead to toxicity. Retinal toxicity is irreversible and can progress after cessation of hydroxychloroquine, thus early screening is important to limit potential vision loss. Baseline screening and annual screening after five years is recommended.  Ancillary testing modalities, such as SD-OCT, mfERG, and autofluorescence provide sensitive screening tools that complement the 10-2 HVF in detection of early hydroxychloroquine toxicity.

Our patient highlights some of the new findings in hydroxychloroquine retinal toxicity, including the importance of early screening with the appropriate tools described above, the lack of sensitivity of some of the outdated tests, and the potential for worsening despite cessation of the offending medication. When our patient initially presented with haloes and swirling light to an outside provider, she had normal visual acuity and no defects on Amsler grid, color vision testing, or on dilated fundus examination. In addition, her 24-2 HVF one-year prior demonstrated non-specific paracentral changes and was considered full. One year later, a 10-2 HVF was obtained that showed dense paracentral scotomas bilaterally (Figure 2), despite normal visual acuity, Amsler grid, and color vision testing. Upon the detection of the visual field defects, the hydroxychloroquine was stopped. She was taking hydroxychloroquine > 5.0 mg/kg/day with a duration of 10 years with a cumulative dose of 1460g putting her at increased risk for hydroxychloroquine retinal toxicity.

Despite cessation of hydroxychloroquine, one-year follow-up revealed a mild worsening visual acuity to 20/30 OD and 20/25 OS, with new abnormalities on Amsler grid and deficits on color vision testing. Subtle parafoveal RPE depigmentation could be seen on biomicroscopy, which was highlighted by hyperfluorescence on fluorescein angiography (Figure 1). Repeat 10-2 HVF testing demonstrated the dense paracentral scotomas. SD-OCT showed loss of the parafoveal inner/outer segment junction, thinning of the parafoveal outer nuclear layer, and a loss of the normal foveal depression, which is characteristic for hydroxychloroquine retinal toxicity (Figure 3). Autofluorescence imaging showed a ring of hyper-autofluorescence in the parafoveal region corresponding to photoreceptor damage and RPE dysfunction (Figure 4). MfERG demonstrated decreased signal centrally in both eyes (Figure 5). Our patient demonstrates the importance of using the new recommended screening tools for the detection of early hydroxychloroquine toxicity. 10-2 HVF, SD-OCT, autofluorescence, or mfERG might have detected the hydroxychloroquine retinal toxicity on the day of her presenting symptoms and possibly earlier, potentially limiting the amount of visual loss.